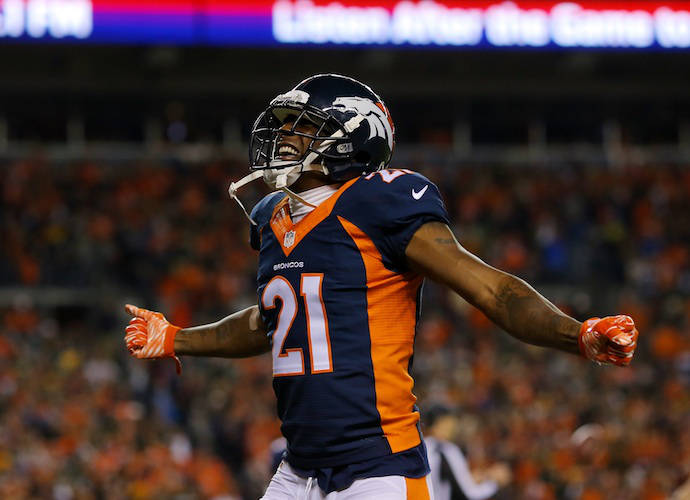 DENVER, CO - NOVEMBER 01: Aqib Talib #21 of the Denver Broncos celebrates the Broncos' safety in the fourth quarter against the Green Bay Packers at Sports Authority Field at Mile High on November 1, 2015 in Denver, Colorado. (Photo by Justin Edmonds/Getty Images)

Yaqub Salik Talib, the brother of retired NFL cornerback Aqib Talib, was indicted for murder in Dallas County Thursday. A grand jury is bringing charges against Talib for shooting a coach during a youth football game outside Dallas.

According to police, the incident occurred on Aug. 13 following an incident between coaches on both teams and the officiating crew. Yaqub Talib, who coached the North Dallas United Bobcats with his brother, allegedly pulled a gun during the altercation and shot Michael Hickmon, 43.

In a video of the incident, five shots are audible, but it’s unclear who was firing. Police said that Hickmon was pronounced dead at the hospital and Talib fled the scene but later turned himself in on Aug. 15.

According to the grand jury, Talib “intentionally and knowingly” killed Hickmon in an act that it considered “clearly dangerous to human life.”

Clark Birdsall, Talib’s attorney, told CNN that the issue of self-defense will come up during the trial. Birdsall has claimed that Hickmon initiated the conflict that ended in gun shots despite conflicting evidence and accounts.

“Mr. Talib regrets the tragic loss of life but turned himself into the law so he could tell his side of the story,” Birdsall said.

Aqib Talib was also present during the incident and the WFAA reported that eyewitnesses claim he initiated the original dispute with referees at the game. Following the incident, Aqib Talib communicated through his lawyer that he was deeply saddened by the “loss of life.”

Before the incident, the former NFL star was slated to take a position as an Amazon studio analyst for Thursday Night Football in the upcoming season. But after his brother was arrested, Ian Rapoport reported that he was no longer taking the job.

Just spoke to Aqib Talib. In light of the recent tragedy, he is going to step aside from his broadcasting duties at Amazon to spend time with his family.

This is not the first time that the Talib family has faced legal trouble, as Aqib Talib had a number of incidents over the course of his playing career.

In 2009, he was charged with battery and resisting arrest without violence in Florida after attacking a cab driver. In 2011, he was indicted for aggravated assault with a deadly weapon after being accused of firing a gun at his sister’s boyfriend. The charges were later dropped due to insufficient evidence and credibility concerns. In 2016, he shot himself in the leg while intoxicated at a strip club, though no charges were filed against him on that occasion.