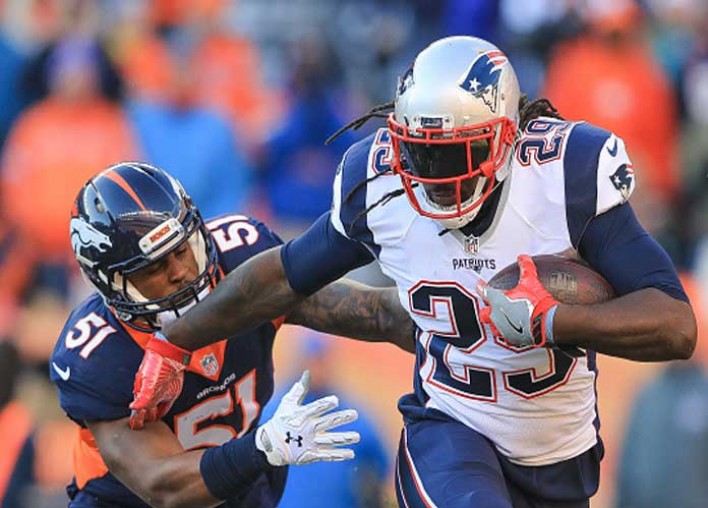 DENVER, CO - DECEMBER 18: Running back LeGarrette Blount #29 of the New England Patriots rushes as inside linebacker Todd Davis #51 of the Denver Broncos attempts a tackle in the first quarter of a game at Sports Authority Field at Mile High on December 18, 2016 in Denver, Colorado. (Photo by Sean M. Haffey/Getty Images)

NFL Network Insider Ian Rapoport explained the move on Wednesday’s Up To The Minute Live.

“By midnight last night, teams had the opportunity to extend tenders to their unrestricted free agents who had not yet signed,” Rapoport stated. “So basically what this is is teams release all of their unrestricted free agents, and say, ‘All right, you go sign with another team, we will not get a compensatory pick anymore and also we don’t have your rights.’ The Patriots had such a list. Michael Floyd, who ended up signing with the Vikings, he was on it, as was Gregg Scruggs. LeGarrette Blount was not on it and I wondered why this morning. The reason why was the Patriots essentially retained his rights, trying to get themselves something if he signs with another team. It’s a tough, ruthless business decision, but it is what the Patriots have done.”

Essentially, the tender means that if Blount remains unsigned past July 22, he can only play with New England for the 2017 season. Should he sign with another team before that date, the running back would count toward the 2018 compensatory draft pick formula. Blount’s tender is worth $2.1 million, a sum that includes money earned via incentives and base salary. The tender had to be extended by May 9.

According to one source, Blount was the only NFL player to receive the UFA tender this year. The 30-year-old running back, who has spent the past three seasons with the Patriots, led the league with 18 rushing touchdowns in 2016, and recorded 1,161 yards on 299 carries.

Some sources appeared to believe Blount, who signed with the Tennessee Titans undrafted in 2010 out of Oregon, would leave New England after the Patriots signed Rex Burkhead and Mike Gillislee in free agency to join a bloated backfield with Dion Lewis and James White.

Blount was in Boston on Wednesday night, and attended the Celtics’ Game 5 Eastern Conference Semifinal victory over the Washington Wizards at TD Garden along with several teammates, as well as Patriots coach Bill Belichick and owner Robert Kraft.

New England will host the Kansas City Chiefs to open the 2017 regular season. Among the other offseason deals the Patriots have signed are trades for wide receiver Brandin Cooks, defensive end Kony Ealy and tight end Dwayne Allen.

In other NFL news, the Arizona Cardinals released linebacker Daryl Washington on Thursday after being conditionally reinstated by the league earlier this week.

Washington hasn’t played in the NFL since 2013. He had been suspended since May 2014 for violating the league’s substance abuse policy by taking marijuana. The 30-year-old linebacker sought counseling afterwards.

“I want to thank the Cardinals organization, especially Mr. Bidwill and Steve Keim for drafting and believing in me, and their continued support,” Washington said in a statement. “We’ve had some really positive and productive discussions this week, and at the end of the day we mutually agreed it was best for both sides to get a fresh start. I’m in the best shape of my life, and very much look forward to the next opportunity, where I will again play at an All-Pro level and help my team make a championship run.”

DENVER, CO – DECEMBER 18: Running back LeGarrette Blount #29 of the New England Patriots rushes as inside linebacker Todd Davis #51 of the Denver Broncos attempts a tackle in the first quarter of a game at Sports Authority Field at Mile High on December 18, 2016 in Denver, Colorado. (Photo by Sean M. Haffey/Getty Images)