NFL: Buccaneers To Be Featured On 12th Season Of HBO's 'Hard Knocks' - uSports.org 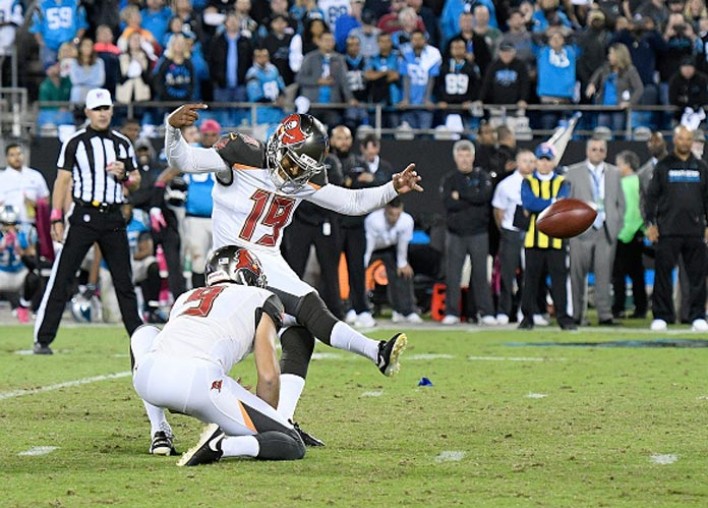 CHARLOTTE, NC - OCTOBER 10: Roberto Aguayo #19 of the Tampa Bay Buccaneers kicks the game-winning field goal as time expires against the Carolina Panthers during the game at Bank of America Stadium on October 10, 2016 in Charlotte, North Carolina. The Buccaneers won 17-14. (Photo by Grant Halverson/Getty Images)

NFL: Buccaneers To Be Featured On 12th Season Of HBO’s ‘Hard Knocks’

The Tampa Bay Buccaneers announced Wednesday that they will be featured on the 12th season of HBO’s Hark Knocks, a show that gives NFL fans a look inside a team’s training camp life.

NFL: Buccaneers to be Focus of New Season of HBO’s ‘Hard Knocks’

The five-episode run of “Hard Knocks” will air each Tuesday from August 8 to September 5. Cameras will show every Bucs movement before their season opener.

The previous NFL team to be the focus of the series were the Los Angeles Rams, whose head coach Jeff Fisher was caught on camera giving an angry, expletive-filled rant about how he refused to let his team finish with a record worse than 10-6.

Matt Dissinger, the director of “Hard Knocks” for NFL Films, stated Wednesday the Bucs were selected for this season among seven other eligible teams because they are viewed as a rising franchise that includes stars like quarterback Jameis Winston.

“This is clearly a team on the rise,” Dissinger said, “a team I would imagine would pique national interest. I’m sure the fans here in Tampa are very excited. But I think this is an opportunity to get Jameis, Mike Evans, Gerald McCoy — this gets some of those names out to a national audience. And it’s very appealing to us. A young, charismatic roster. I think it’s a good match.

“It seems like whatever team we choose on a year-to-year basis, it’s almost a perfect point in time for us to be there, and that’s the way I feel about this season with Tampa.”

The Bucs have not reached the playoffs in nine years, but clearly, there appears to be some expectation that Tampa Bay could turn its luck around.

The NFL Films crew of 30 people will film more than 1,500 hours of tape for the series. Many coaches and players will wear microphones.

Each one-hour episode of “Hard Knocks” (including repeats) has averaged 3.9 million viewers the past three seasons.

Bucs coach Dirk Koetter said about a dozen players on his squad have appeared on the show with other teams.

Koetter was the Atlanta Falcons’ offensive coordinator when “Hard Knocks” went to training camp with them in 2014.

Although the Falcons finished the season 6-10 that year after being featured on the show, Koetter said he didn’t believe “Hard Knocks” would be a distraction for Tampa Bay.

“This is the NFL. There are bright lights. I look at it as it’s just part of the deal. I think we’ll be fine,” said Koetter. “There’s going to be some stuff. It’s a TV show. The real TV shows are Sundays in the fall. Those are the ones I worry about.

CHARLOTTE, NC – OCTOBER 10: Roberto Aguayo #19 of the Tampa Bay Buccaneers kicks the game-winning field goal as time expires against the Carolina Panthers during the game at Bank of America Stadium on October 10, 2016 in Charlotte, North Carolina. The Buccaneers won 17-14. (Photo by Grant Halverson/Getty Images)