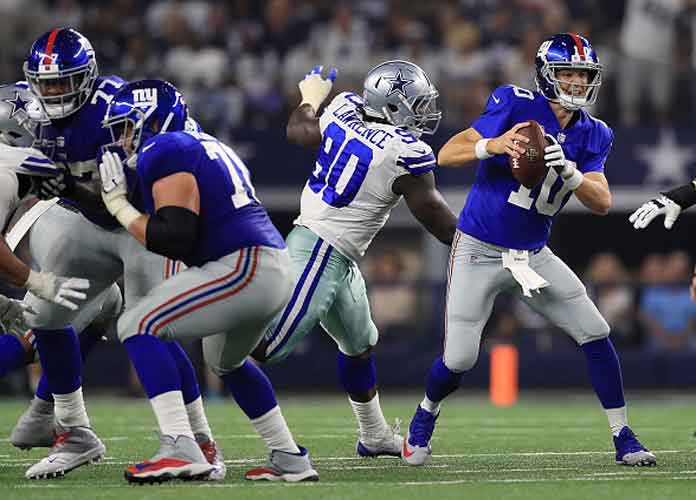 ARLINGTON, TX - SEPTEMBER 10: Eli Manning #10 of the New York Giants scrambles away from DeMarcus Lawrence #90 of the Dallas Cowboys in the second half of a game at AT&T Stadium on September 10, 2017 in Arlington, Texas. (Photo by Ronald Martinez/Getty Images)

NFL Agrees To Deal To Put Game Highlights On Facebook

The National Football League and Facebook have agreed to a deal to allow game highlights and recaps to air on the giant social media network, according to several reports.

Facebook has been looking to add more video content to attract viewers, while the NFL is also hoping to gain a larger, younger audience amid a rapid decline in cable subscriptions.

The social media behemoth has voiced interest in live-streaming Thursday night NFL games, although it was beat out by Amazon, which earlier this year signed a one-year, $50 million deal to live-stream the ten Thursday night games broadcast by NBC and CBS this season. (These games have been simulcast on NFL Network thus far).

The NFL said in a statement that the deal with Facebook includes video highlights for playoff games and the Super Bowl.

Certain NFL Films, documentary-style productions delivered by the league, will also be added to Facebook.

The deal is reportedly effective immediately worldwide and is for two years. Terms regarding advertising were not disclosed.

“We have millions of fans on Facebook, and they continue to demonstrate an incredible appetite for NFL content,” Hans Schroeder, chief operating officer of NFL Media, said in a statement.

Facebook is the world’s largest social network with approximately two billion users worldwide. The NFL videos will appear on its Watch tab.

The company hopes the agreement will allow “active NFL fan communities on Facebook to watch and debate the top storylines from each week,” Dan Reed, Facebook’s head of global sports partnerships, said in a statement.”

According to Business Insider, among the videos that will be included in the deal are “NFL Turning Point,” which will break down key moments in games, and “Sound FX,” which will feature audio from select players who are mic’d-up during games. Each of those video packages will include corresponding Facebook channels that fans can like and follow.

Reuters reported that Facebook Watch already has one NFL-related program: a reality show on Oakland Raiders running back Marshawn Lynch for which Facebook is paying Time Warner Inc-owned Bleacher Report millions of dollars.

ARLINGTON, TX – SEPTEMBER 10: Eli Manning #10 of the New York Giants scrambles away from DeMarcus Lawrence #90 of the Dallas Cowboys in the second half of a game at AT&T Stadium on September 10, 2017 in Arlington, Texas. (Photo by Ronald Martinez/Getty Images)