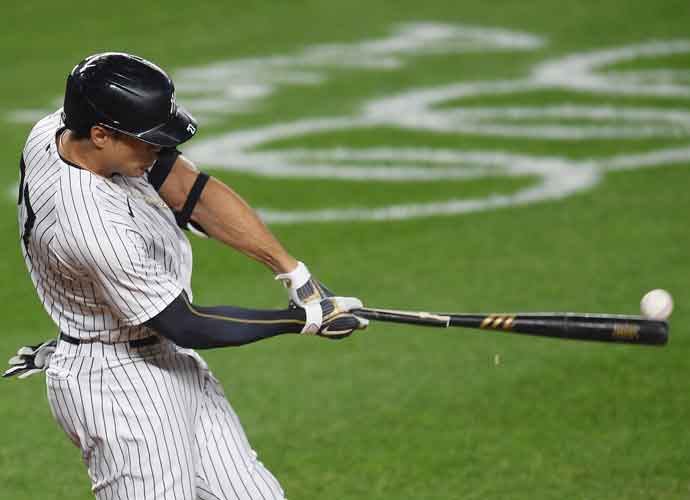 NEW YORK, NEW YORK - SEPTEMBER 25: Giancarlo Stanton #27 of the New York Yankees hits during the third inning against the Miami Marlins at Yankee Stadium on September 25, 2020 in the Bronx borough of New York City.

The New York Yankees injury woes continue during the early stages of the season, as designated hitter Giancarlo Stanton was placed on the ten-day injured list Monday because of his left quad strain. Fellow teammate and left-handed pitcher Zack Britton also had a setback in his recovery from elbow surgery. This news is troubling for a Yankees team that is trying to overcome a bad start to the season.

Stanton had been with the team in Texas, until officials decided to put him on the injured list following Sunday’s game. Stanton’s suffering from a soft tissue issue, and needs a few more days until he’s ready. Options like an MRI are still on the table for the Yankees slugger, who could be eligible to be activated after the Yankees’ off day next Monday.

Aaron Boone talk about the 2017 MVP. “Hopeful that, especially when we can backdate a few days, that coming out of the off day we’ll be alright, and hopefully just put this behind us entirely,” Boone said. “As much as he wants to be out there, I think he also realized that if it’s something he pushed through, it could turn into a longer-term situation.” Stanton was having a very successful season before the injury, hitting .282 with nine homers and 24 RBIs in his 33 games this season.

Regarding Britton, Boone also had some thoughts. “I think just general soreness. It could just be related to the normal ramp-up of going into a sim game and facing hitters.” Britton is still on the 60-day injured list after elbow surgery.

As for other Yankee players, second baseman Rougned Odor, who missed his 12th game because of a left knee sprain, is expected to be back at some time during the series. Teammate and star outfielder Aaron Hicks was sadly also put on the 10-day injured list Sunday, after tearing a tendon sheath in his left wrist. The injury isn’t believed to have a long term impact in his season and he should be back soon.