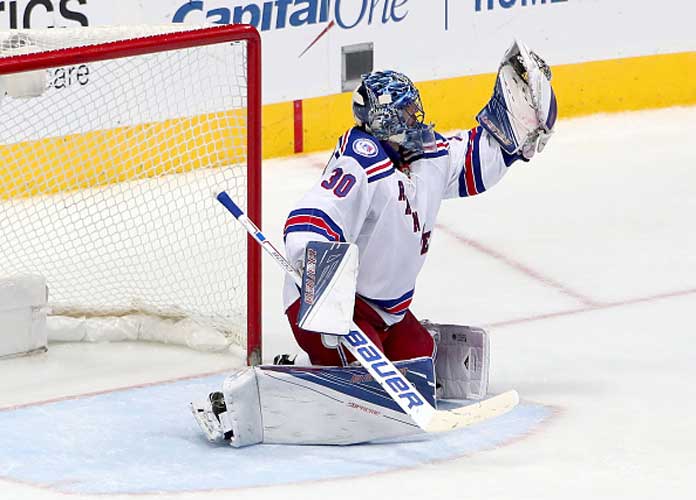 DALLAS, TX - DECEMBER 15: Henrik Lundqvist #30 of the New York Rangers blocks a shot on goal against the Dallas Stars in the third period at American Airlines Center on December 15, 2016 in Dallas, Texas.

It is the end of an era for hockey in New York. After 15 seasons in New York, Rangers’ legend Henry Lundqvist has had his contract bought out by his team. “Few players have been as important to the Rangers franchise as Henrik Lundqvist, and we are incredibly grateful for all he has done for our organization,” James Dolan said in a news release. “Over his 15-year tenure, he not only established himself as one of the best goaltenders to ever play the game, he has also been one of hockey’s fiercest competitors and most effective ambassadors. He will always be a part of the Rangers family.”

On his Twitter Lundqvist wrote, 15 years ago, “I played my first game for @NYRangers I came here with high hopes and big dreams but in my wildest imagination, I could never have pictured the amazing ride that lay ahead…”

THANK YOU FOR EVERYTHING!
15 years ago, I played my first game for @NYRangers I came here with high hopes and big dreams but in my wildest imagination, I could never have pictured the amazing ride that lay ahead.. pic.twitter.com/uo0HJMZnCj

Lundqvist leaves behind an amazing legacy and an amazing accumulation of stats being the club’s all-time leader in goaltending wins (459), starts (871), games played (887) and shutouts (64). He is the club leader in playoff appearances, with 130, and playoff wins, with 61, and he is currently sixth on the NHL’s all-time list for goaltending wins, and second, among active goaltenders. It is unclear what Lundqvist’s next move is, with NHL free agency just around the corner, but based on his tweet this may not be the end of the 38-year-old’s NHL career just yet.