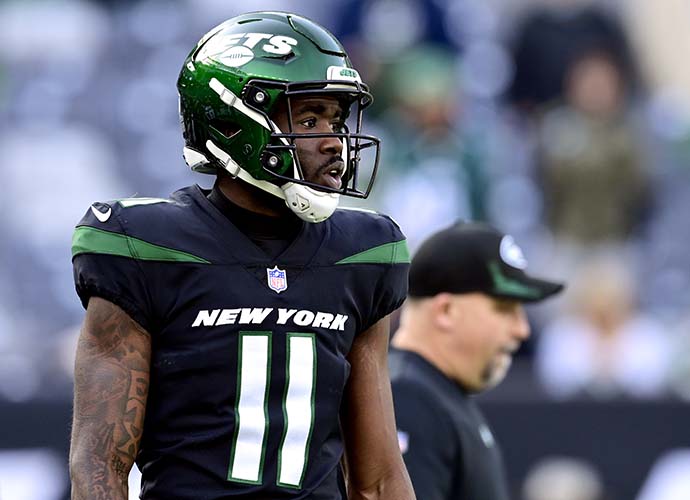 EAST RUTHERFORD, NEW JERSEY - DECEMBER 05: Denzel Mims #11 of the New York Jets warms up prior to the game against the Philadelphia Eagles at MetLife Stadium on December 05, 2021 in East Rutherford, New Jersey. (Photo by Steven Ryan/Getty Images)

It may not be how fans and the coaching staff envision it – but Denzel Mims could get a big opportunity for the first time in 2022.

The New York Jets’ 2020 second-round pick showed some promise in his rookie campaign but has failed to see much of the field since then.

It all started when he got food poisoning during the spring of 2021 after consuming bad salmon.

That caused Mims to lose 20 pounds and affect him during training camp that year.

Mims slipped down the depth chart and just had 133 yards receiving in 2021, down from 357 yards in his rookie campaign.

Despite showing up in much better shape this year and the coaching staff raving about his abilities during training camp, Mims hasn’t seen the field so far in the 2022 regular season.

“You can only dress five and there’s special teams value. Denzel is still here cause we have a lot of faith in him. He needs to continue working and be ready when his number’s called.”

Well, his number will finally be called, as 2021 first-round pick Elijah Moore has been disgruntled with the number of targets he has had.

He took his frustration out on Twitter after Sunday’s win against the Green Bay Packers.

Moore frustratingly responded to a tweet from Jets reporter Rich Cimini, who noted he had only been targeted once in the contest.

The 22-year-old has deleted the tweet – but things have escalated more since then.

Moore got into a heated exchange with Jets offensive coordinator Mike LaFleur and reportedly requested a trade.

Saleh says it "got to a boiling point" yesterday as Moore expressed his "displeasure." (It was a blow-up with LaFleur, per source.) #Jets

But Saleh made it clear on Friday that “trading him is not an option.”

Instead, the Jets will make Moore inactive on Sunday and allow him to cool down, hoping to come up with a game plan that works for him and the team.

While the talent is obvious, the Jets have found a ton of success this year running the football.

It’s unclear how much Mims will play but he will get some kind of opportunity in Moore’s absence.

The 4-2 Jets will play the 2-4 Denver Broncos on Sunday on the road.