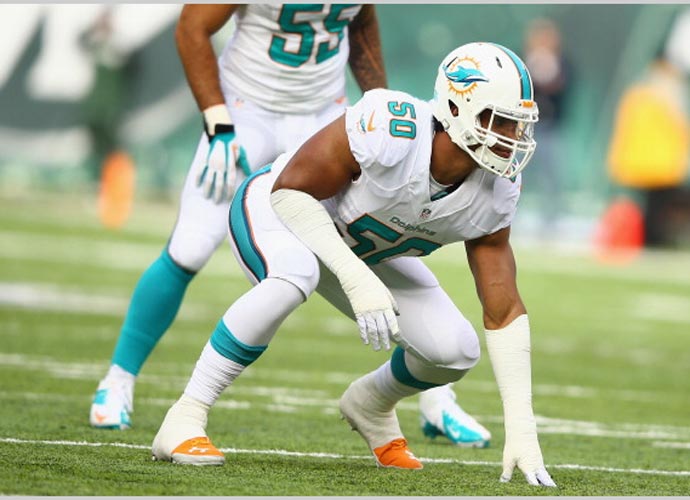 Caption:EAST RUTHERFORD, NJ - DECEMBER 01: Olivier Vernon #50 of the Miami Dolphins in action against the Miami Dolphins during their game at MetLife Stadium on December 1, 2013 in East Rutherford, New Jersey. (Photo by Al Bello/Getty Images)

The #Giants are trading LB Olivier Vernon to the #Browns, sources tell me and @RapSheet.

The Giants will also swap a fourth-round pick in the upcoming draft for Cleveland’s fifth rounder. On Wednesday, the official start of the NFL year, the trade will become official.

In Vernon, Cleveland finds a productive defensive playmaker. Last season he led the Giants with seven sacks and 21 quarterback hits in just 11 games. While New York runs a 3-4 defensive scheme, under Steve Wilks‘ 4-3 defense, Vernon can expect to line up as a defensive end.

The move is being interpreted by some as a salary cap dump. Vernon is projected to make $15.5 million in each of the next two seasons. While Zeitler does bolster an atrocious offensive line and save the Giants $1.5 million in cap space, he doesn’t warrant a one-for-one trade for Vernon.

During the NFL combine, New York looked into moving the 28-year-old. They had previously hoped to swap him for draft picks and get another premier pass-rusher. Some speculate that this may mean the Giants are looking into more trades.

While his time with the Giants didn’t lead to any deep postseason runs, it wasn’t because of poor performance on the field. If anything it was because he wasn’t on the field enough. Since signing a five-year, $84.75 million deal in the 2016 offseason, injuries have plagued the lineman. Despite not missing a game in his first five seasons, he missed nine in the last two alone.

Vernon has been one of the most electrifying players in the league when he was on the field. To see him lined up next to talented teammates will be a spectacle to watch.