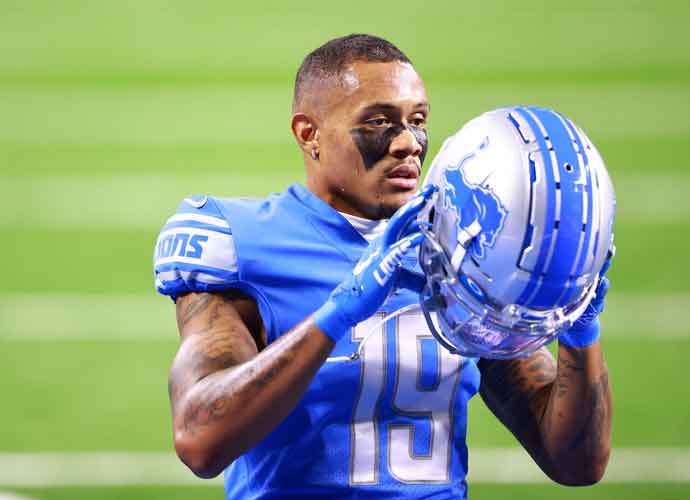 DETROIT, MI - OCTOBER 04: Kenny Golladay #19 of the Detroit Lions during warm ups before a game against the New Orleans Saints at Ford Field on October 4, 2020 in Detroit, Michigan. (Photo by Rey Del Rio/Getty Images)

The New York Giants have signed arguably one of their biggest free-agent signings this offseason. The Giants have brought in Pro Bowl wide receiver Kenny Golladay to the team. The Giants signed Golladay on a four-year, $72 million contract that includes $40 million guaranteed.

The addition of the wide receiver is good news for the Giants who get a valuable playmaker and finally fill the hole that was left after the Odell Beckham Jr. trade. Golladay is a player that can make plays whether he is covered or not. He has consistently ranked high in the contested catch category throughout his career. Since 2018, the wideout has a 63% contested catch rate and a total of 53 contested catches.

Golladay’s best season was in 2019 with the Detroit Lions when he had 1,190 receiving yards, 11 touchdowns and 65 receptions, which earned him his first Pro Bowl selection. In 2020, the wideout only played in five games due to injury.

Golladay will help young starting quarterback Daniel Jones who needed good wide receivers to help on the offense side. Jones has been cursed with receivers who have dropped many of his perfect passes. Some of those passes even went of his receiver’s hands and into the hands of the defender. That won’t happen with Golladay. The signing bolsters the team’s deep passing game.

Not only that but it frees up other wide receivers. It frees up fellow teammate Darius Slayton, who was often double covered last season. Slayton excels when there is only one defender on him. Furthermore, the signing allows Sterling Shepard into the slot where he has been good. As a rookie, Shepard was used in the slot where he was able to catch eight touchdowns and had a 63.6 % contested catch rate. That is like the newly signed Pro Bowler, so the Giants’ offense has no excuses next season. They should look very good in 2021.