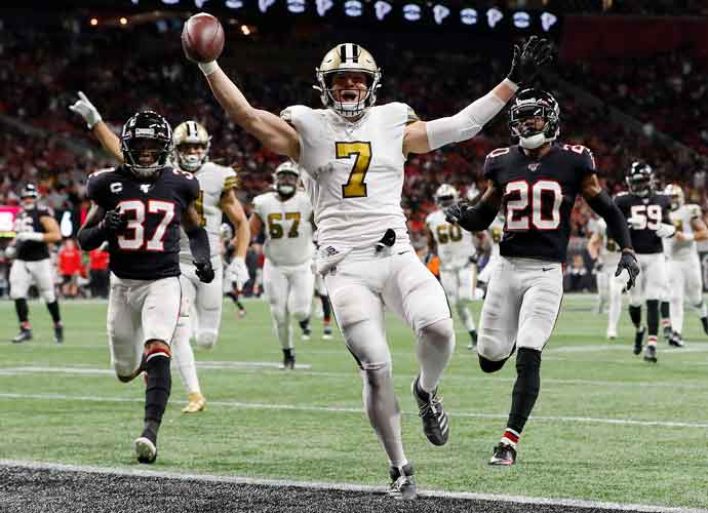 ATLANTA, GEORGIA - NOVEMBER 28: Taysom Hill #7 of the New Orleans Saints celebrates as he scores on a 30-yard touchdown run during the second quarter against the Atlanta Falcons at Mercedes-Benz Stadium on November 28, 2019 in Atlanta, Georgia.

After going 11-5 in 2017, but losing in the NFC Divisional Round because of the Minneapolis Miracle and going 13-3 in 2018, but losing in the NFC Championship Game because of a missed pass interference call, fans of the New Orleans Saints thought 2019 would be different. As you probably know unless you have been living under a rock, it was not. The Saints last season went 13-3, but lost in the Wild Card round in overtime to the Minnesota Vikings once again, despite not getting a chance on offense. Drew Brees turned 41 back and January and the question is now how much does he have left. Jameis Winston and Taysom Hill will serve as Brees’ backups but we really don’t know if they can fill his shoes. Also with Brees’ comments regarding the protesting during the national anthem, although he has apologized and his teammates say it is all good, there was a riff created in the Saints’ locker room that could be a hindrance to them having success in 2020. Regardless of a possible riff, the Saints are immensely talented on both sides of the ball. On offense outside of Brees, Michael Thomas is coming off a record breaking season at the wide receiver position, Alvin Kamara is looking to bounce back after a down year, Jared Cook had somewhat of a resurgence, and the Saints signed Emmanuel Sanders in the offseason to give Brees another wide receiver target outside of Thomas, because that has surely been issue. On defense Cameron Jordan is an anchor on that defensive line along with Sheldon Rakins, Marcus Davenport and Malcolm Brown. Demario Davis balled out last season at linebacker. Then in the secondary, Janoris Jenkins after a few not so great years in New York performed well last season for New Orleans in three games, he will play alongside Malcolm Jenkins, Marcus Williams and one of the top cornerbacks in football in Marshon Lattimore. The Saints also have one of the best special teams units in the NFL with Wil Lutz, Thomas Morestead and Deonte Harris. Maybe more so this year than in year’s past, Sean Payton will be forced to quiet the noise around his team and make sure everyone stays focused.

Looking at the Saints’ schedule, do I think they can have success in 2020, yes, but it will not be easy. Looking at the five games before the Saints’ bye week, they open with a doozy, Tom Brady and the Tampa Bay Buccaneers at home. The Saints should win this game given the craziness of this offseason, but I wouldn’t be shocked if the Bucs pull one out and that could be the difference of the Saints winning the division versus not. I know that is Week 1, but to lose a game to a division foe at home rarely bodes well to a team’s playoff hopes. The Packers will be a tough matchup in Week 3, but that game is at home as well. The Saints can very easily enter their bye at 5-1 or 4-2, and everyone will be on their hype train for the remainder of their season. After their bye week, there are some doozies on the Saints’ schedule. From Week 9 to Week 16, they will be playing opponents with some dynamic offenses on paper and as each week goes by, the more and more tired that team will get. Don’t be surprised if the Saints enter Week 17 against Carolina needing a win to get into the playoffs because that is one of the toughest stretches a team will face all season in terms of their schedule. I know I said when the schedules first came out, I said that Carolina had the toughest schedule in the NFC, but the Saints come in a close second.

The Saints, because of their offense alone, will be a fun team to watch if everyone stays healthy. But with their schedule and all the other storylines that surround this team entering the season, I will definitely try to make it to at least one Saints game this season. Here are the five Saints games I think you should attend in 2020:

First things first, the reason why I don’t have Week 1 against Tampa Bay or Week 3 against Green Bay is simply because those games don’t bring as much intrigue to me as these give games do. Week 5 against the Chargers, the game before the Saints’ bye. The Chargers look to be a much improved team this year and their defense is no joke. Although the Saints will be favored in this one, this will not be a cakewalk and one of those games that if the Saints lose, and are underperforming after their first five games, there could be some shake ups, including maybe a benching of Brees in favor of Winston. Week 9 against Tampa. This game is the one I might be most excited for on the entire Saints schedule this year, because it is the start of that gauntlet stretch late in the season, they will have to go on to road, and most likely this point, Brady and the Buccaneers have ironed out any issues that might have plagued them early on in the season. Week 13 against Atlanta, another team that looks to be much improved from 2019, the Falcons have a top-tier on offense and if they are all healthy, this could be a game that if the Saints were to lose, could be the final nail in their coffin in terms of their playoff hopes given their final four opponents. Week 15 against Kansas City is a simple one, Patrick Mahomes and that dynamic Chiefs offense, against one that is no slouch themselves in New Orleans. This should be a high octane game with little to no quality defense being played. Finally, Week 16 against Minnesota, I mentioned this in my Vikings schedule preview story, a rematch from last season’s playoffs in New Orleans, where the Saints will most likely be out for blood, regardless of whether or not they have clinched a spot in the postseason. This game will be played on Christmas Day as well, which should offer some fun. Also if the Saints are in second or third in the NFC South, this game could be one late in the year where whoever wins gets one of the three (or I guess two because it is almost a certainty the second place team in the NFC West makes the playoffs) wild card spots in the playoffs.