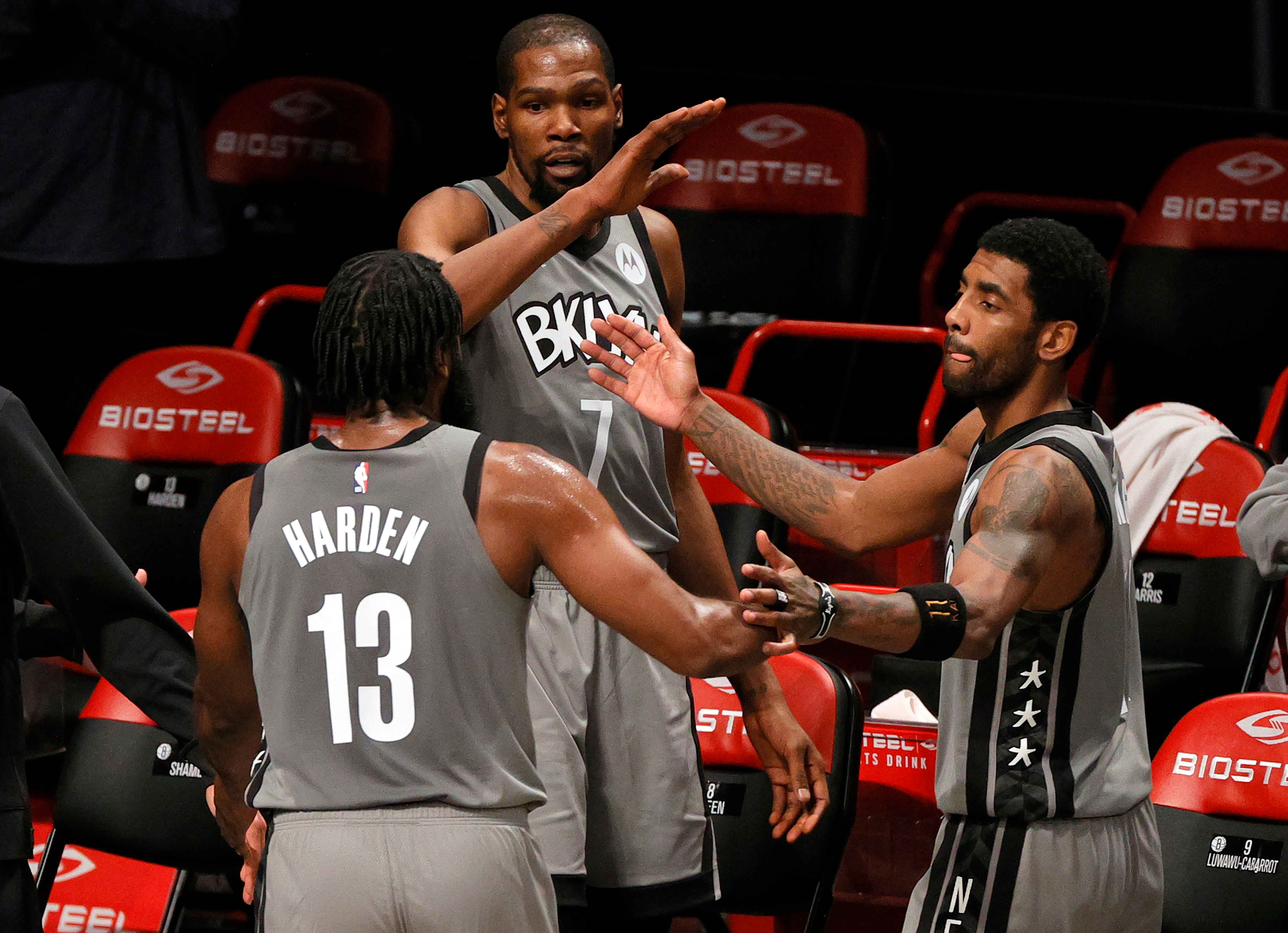 NEW YORK, NEW YORK - JANUARY 25: James Harden #13, Kevin Durant #7, and Kyrie Irving #11 of the Brooklyn Nets high-five after coming off the court during the second half against the Miami Heat at Barclays Center on January 25, 2021 in the Brooklyn borough of New York City. The Nets won 98-85. NOTE TO USER: User expressly acknowledges and agrees that, by downloading and or using this Photograph, user is consenting to the terms and conditions of the Getty Images License Agreement. (Photo by Sarah Stier/Getty Images)

The Brooklyn Nets met the Los Angeles Clippers on Tuesday night. It was a game between two star-studded teams. Although It was expected to be a close game, it was not until the final minutes of the game.

The Nets are led by superstars Kyrie Irving, Kevin Durant and James Harden. They are a roster that was built to be instant title contenders, much like the Clippers. The team is headed by coach Steve Nash, a Hall of Fame player but an inexperienced coach. The Nets only had Irving and Durant before trading for Harden, to complete their big three. However, Brooklyn paid a price in order to get Harden, and that was their team defense.

The Nets gave up valuable players and draft picks to get the star studded shooting guard from the Houston Rockets. The team is currently one of the worst-ranked teams in defense. However, they are one of the highly ranked offensive teams in the league.

Los Angeles is led by their superstar duo of Paul George and Kawhi Leonard. Similarly to Brooklyn, this Los Angeles team was built to be an instant title contender last season. Indeed, they fell short of expectations after being eliminated in the Western Conference Semi Finals. It is very possible that last night’s contest was a preview of the NBA Finals.

Brooklyn’s scoring came from their big three. Irving’s 39 points led the team in scoring. Durant had 28 points and nine rebounds while Harden had a triple-double with 23 points, 14 assists, and 11 rebounds. The three star players came up big in the fourth quarter, as they were able to come back to seal their 124-120 victory.

The Los Angeles duo was not to be outshined as Leonard scored 33 points and George had 26 points. Additionally, veteran Nicolas Batum added 21 points to help the Clippers keep this one close.

The Clippers showed up in the game as they took an early lead when they went on a 14-4 run in the first quarter. The momentum continued as Brooklyn struggled to score early on. Midway through the first quarter, the Nets trailed by double digits. By halftime, Brooklyn trailed Los Angeles 56-45.

The fourth quarter was the pivotal moment for the trailing Nets. Brooklyn, once again trailing, went on an important offensive run with less than five minutes remaining. Irving scored eight straight, as the team capped an impressive 13-0 run. The defense of Brooklyn came alive and held the Clippers scoreless for three minutes. This gave the Nets enough time to take the lead with four minutes remaining in the game.

The team finished with a 124-120 win over the Clippers. While it was a close game, it was too close for comfort. The game continued to highlight one of the obvious weaknesses of Brooklyn and it was their defense. Luckily, their star-studded cast was able to outscore Los Angeles to take the victory and get back on track.