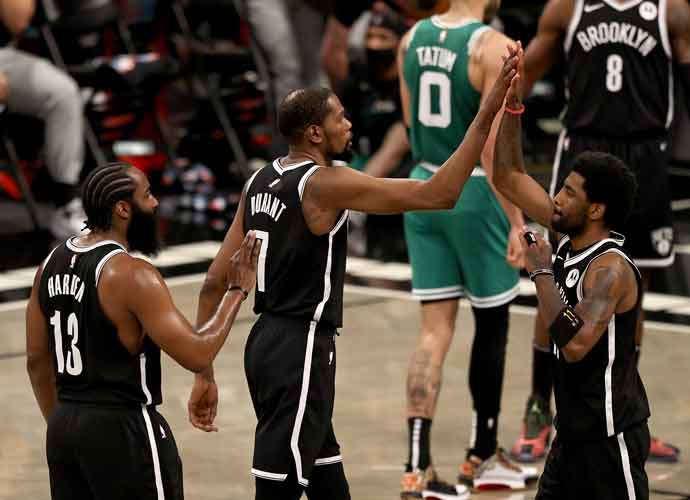 NEW YORK, NEW YORK - MAY 22: Kyrie Irving #11 of the Brooklyn Nets is congratulated by teammates Kevin Durant #7 and James Harden #13 after Irving drew the foul against the Boston Celtics during Game One of their Eastern Conference first-round playoff series on May 22, 2021 at Barclays Center in the Brooklyn borough of New York City. (Photo by Elsa/Getty Images)

The Brooklyn Nets‘ big three earned the team its first playoff series win by dispatching the Boston Celtics on Tuesday.

James Harden led the way for Brooklyn with a triple-double. The All-Star had 34 points, 10 assists and 10 rebounds in Brooklyn’s 123-109 win over Boston. Kyrie Irving added 25 points, and Kevin Durant contributed 24 points.

It was also Harden who led the offense at the start of the game. The shooting guard scored the team’s first six points before Irving chipped in. At the end of the first quarter, Harden had 11 points, and Irving had 9 to combine for 20 of Brooklyn’s 31 points.

Heading into Tuesday’s game, the Celtics were once again without All-Stars Kemba Walker and Jaylen Brown. It was up to Jayson Tatum to carry the team and stave off elimination. Tatum had already done that once but was unable to overcome the Nets’ big three. Tatum led Boston with a team-high 32 points in the game. Marcus Smart got involved in the offense during the second half, and Romeo Langford added 17 points for Boston.

Brooklyn led the entire game and by the third quarter, their scoring became too much for the Celtics. The Nets started to pull away in the second half. They remained ahead for the rest of the contest to eliminate Boston from the postseason. Brooklyn advances to the second round for the first time since 2014, and they set themselves up with one of the most anticipated second-round matchups with the Milwaukee Bucks.

The Nets’ big three will have a tough series ahead of them in the second round. However, it should be noted that the Nets’ big three had a combined 85.2 points per game in the first round. It is the most points by a trio of teammates in a playoff series in league history. That statistical feat should show how scary the team is offensively. Ironically, although the Nets were the best offensive team throughout the first round of the playoffs, the Bucks were the best defensive team. This second-round series will be a clash of two powerhouse contenders.