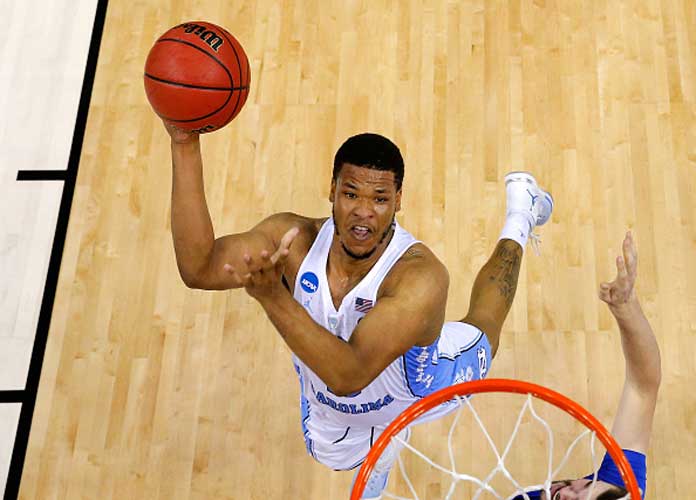 MEMPHIS, TN - MARCH 26: Kennedy Meeks #3 of the North Carolina Tar Heels shoots in the second half against the Kentucky Wildcats during the 2017 NCAA Men's Basketball Tournament South Regional at FedExForum on March 26, 2017 in Memphis, Tennessee.

The Final Four of the 2017 NCAA men’s basketball tournament has been set.

The national semifinals will be held in Glendale, Arizona on Saturday, and will feature South Carolina — who defeated Florida 77-70 on Sunday — against top-seed Gonzaga, who beat Xavier 83-59 on Saturday.

Here are ten facts and statistics to know about these final two March Madness brackets:

2. Only 657 people (out of almost 19 million) on ESPN predicted these four teams would reach the Final Four.

3. Very few people also doubted South Carolina would make it to the semifinals. Many more people in ESPN’s brackets had South Dakota making it this far, although the Jackrabitts fell to Gonzaga 66-46 in their very first game. Here are all the teams most people believed had greater chances of success in the NCAA tournament than the seventh-seeded Gamecocks:

4. Oregon’s Jordan Bell is a rebounding machine. The junior guard blocked eight shots for the Ducks last game, and finished with 13 rebounds (seven offensive), which gives him at least 12 in every tournament game thus far. Additionally, Oregon has reached its first Final Four since 1939, a tournament which the Ducks ended up winning.

He’s the first to pull down 12+ boards in 5 straight tourney games since HOFer Hakeem Olajuwon in ’83-84. pic.twitter.com/5hN4gfsLLI

5. South Carolina’s Sindarius Thornwell could make NCAA Tournament history. The senior guard has made 32 free throws for the Gamecocks so far this tournament and is 23 away from the all-time record. Thornwell has averaged 10.7 free throws in his last three games, and needs to average 11.5 over the next two (assuming South Carolina advances).

6. Former Kanas State coaches represent half the teams. Frank Martin (South Carolina) and Dana Altman (Oregon) were both head coaches of the Wildcats at one point. Altman’s tenure ended more than 20 years ago (1994), but it’s still rather interesting.

7. South Carolina and the Gonzaga Bulldogs are both playing in their first-ever Final Four. This is the first matchup where both teams making their first national semifinals appearance play each other since 1973 (Memphis vs. Providence).

8. Gonzaga (36-1) is only the eighth team to reach the Final Four with one loss or less since the tournament’s expansion in 1985. None of the previous seven teams won the championship.

9. South Carolina had a tough road to the Final Four. The Gamecocks had to overcome three halftime deficits (Marquette, Duke, Florida) and did so by outscoring opponents by 54 total points in the second half. According to Elias Sports (via ESPN), South Carolina is just the fourth team to overcome three halftime deficits to reach the Final Four, with Georgetown the most recent to do it in 2007.

10. Chances of winning the tournament:

According to ESPN’s College Basketball Power Index, Gonzaga has the best odds of winning the NCAA title:

MEMPHIS, TN – MARCH 26: Kennedy Meeks #3 of the North Carolina Tar Heels shoots in the second half against the Kentucky Wildcats during the 2017 NCAA Men’s Basketball Tournament South Regional at FedExForum on March 26, 2017 in Memphis, Tennessee. (Photo by Andy Lyons/Getty Images)