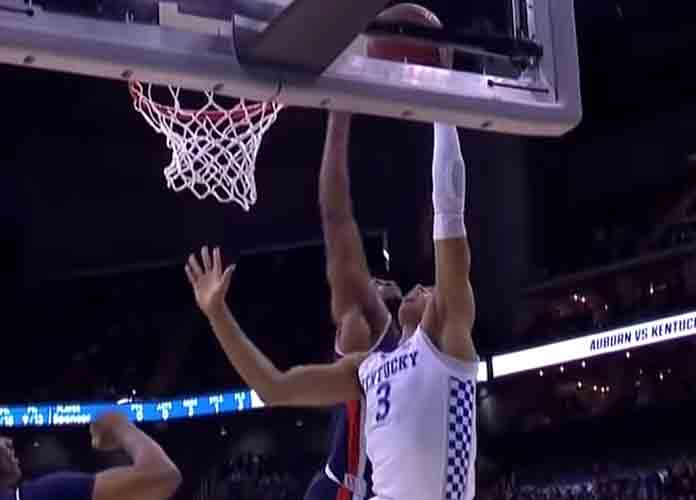 Auburn star Chuma Okeke tore his ACL in the Tigers’ victory over North Carolina on Friday night. Of course, this drew panic from fans who couldn’t imagine how the team would advance after losing a centerpiece while already a No. 5 seed.

But the resulting changes might have worked to their advantage when they took on No. 2 seed Kentucky on Sunday. Either way, the Tigers won 77-71 on Sunday to head to their first Final Four in school history.

The Tigers seemed to represent what the Elite Eight became in its last two games: Underdog teams relying on defense beat out sloppy play by teams loaded with players killing a year before they go pro. Auburn joins two other teams with a first-time coach in this year’s Final Four. Their Bruce Pearl will square off against Virginia coach Tony Bennett in hopes of taking on either Texas Tech coach Chris Beard or Michigan State coach and “Mr.March” Tom Izzo.

Down five at the end of the first half, Auburn looked for something to carry them, not knowing the game was going to go to overtime. They simply hoped to hang close. Then, Okeke was wheeled out behind the bench.

“It gave our team a lift,” Tigers guard Jared Harper said of seeing Okeke join the Auburn bench. “He told us before the game that he was hurting a little bit and that he probably wasn’t going to make it in. But Coach told us at halftime that Chuma was on the way to come support us. We needed that support.”

Auburn outscored Kentucky 30-25 in the second half. While Okeke was out, the big-man rotation that included Anfernee McLemore, Austin Wiley, Danjel Purifoy and Horace Spencer filled in. It was that group that made sure to stop Kentucky from getting up a last-second chance at victory in regulation.

We are going to overtime. pic.twitter.com/GnaV1EsiRa

In overtime, Auburn ran off and outscored Kentucky by six points. Auburn made circus shots on assists dished out by Harper to stay in the lead. Coach Pearl was sure to give him credit.

“It’s an honor to even be on the floor with those programs, and then when you play, your kids play hard and play unselfishly and play together, obviously they’re the Cinderellas of this tournament,” Pearl said. “And that’s what makes March so special, which team is it going to be?”

This shot could only happen in March. pic.twitter.com/tcSO15XAWJ

After they defeated Kentucky and made school history, the Tigers made sure to include Okeke. From his wheelchair, he pasted Auburn’s name on the Final Four line in a tournament bracket out at midcourt.

“Coming into the game, we said this is all for Chuma,” Harper said. “Going to the Final Four and trying to compete for a national championship is all for Chuma. He put so much on the line for us this year.'”

Auburn will take on No. 1 seed Virginia, the only remaining top seed, on Saturday.