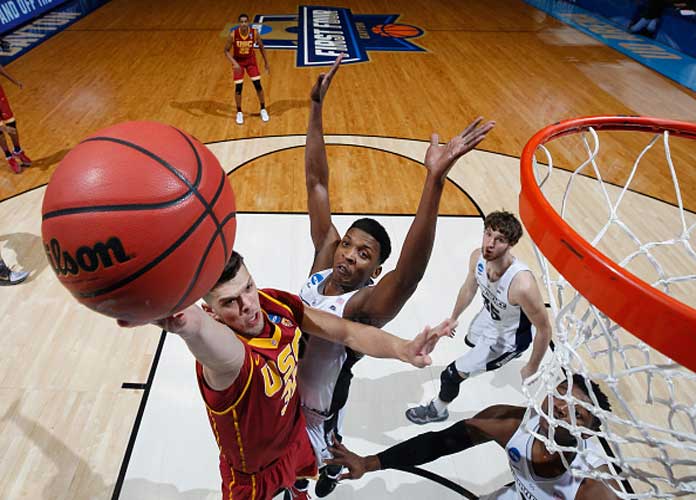 DAYTON, OH - MARCH 15: Nick Rakocevic #31 of the USC Trojans shoots the ball against Rodney Bullock #5 of the Providence Friars in the first half during the First Four game in the 2017 NCAA Men's Basketball Tournament at UD Arena on March 15, 2017 in Dayton, Ohio. (Photo by Joe Robbins/Getty Images)

Chima Moneke recorded 18 points and 12 rebounds to lead UC Davis to a 67-63 victory over the North Carolina Central Eagles at UD Arena in Dayton, Ohio on Wednesday night in the Aggies’ first-ever NCAA Tournament appearance.

Brynton Lemar scored 15 points and Lawrence White added 14 for UC Davis, which reached the NCAA Tournament by winning the Big West Conference tournament. Moneke had two rim-shaking dunks in the first half.

The Aggies won despite 18 turnovers that led to 20 points for the Eagles.

North Carolina Central, which shot poorly throughout the night and particularly during the second half, trailed by just one point, 64-63, with 1:49 remaining in the game on a 3-pointer from Dajuan Graf. The Eagles retrieved the ball with 37 seconds left, but Graf missed his second three-point attempt. Graf’s foul on Lawrence White then led to two free-throws with 16 seconds remaining, and then Lemar scored a foul shot with four second remaining to seal the win.

Graf led the Eagles (25-9) with 15 points, 12 of which came in the first half. Kyle Benton and Patrick Cole added 13 points apiece.

North Carolina Central went on a 16-3 run toward the end of the first half and led 34-31 at the break. UC Davis led by as many as nine points in the first half.

In Wednesday night’s other First Four matchup, the Southern California Trojans rallied from a 17-point deficit in the second half to defeat the Providence Friars 75-71.

Bennie Boatwright led the Trojans with a career-high 24 points.

“It does feel good getting payback from last year, because that was a tough loss,” Boatwright said.

No. 11 seed USC will next face No. 6 seed SMU in Tulsa on Friday. Southern Cal is 5-1 all-time against SMU.

“I think we just got out-toughed in the second half,” Providence guard Jalen Lindsey said. “We weren’t playing with the same passion we were in the first half, and it showed. And they executed their game plan and we kind of faltered back.”

Emmitt Holt led the Friars with 18 points and 11 rebounds. Lindsey and Rodney Bullock added 17 each.

“I thought we got lazy defensively in the second half, and I was really shocked at that given the time and score of this game,” Providence coach Ed Cooley said.


DAYTON, OH – MARCH 15: Nick Rakocevic #31 of the USC Trojans shoots the ball against Rodney Bullock #5 of the Providence Friars in the first half during the First Four game in the 2017 NCAA Men’s Basketball Tournament at UD Arena on March 15, 2017 in Dayton, Ohio. (Photo by Joe Robbins/Getty Images)
Read more about:
men's basketball NCAA March Madness North Carolina Central Providence Friars UC Davis USC Trojans
Listen to the uInterview Podcast!
Get the most-revealing celebrity conversations with the uInterview podcast!