NCAA Final Four: Duke and Wisconsin to Square Off For National Championship - uSports.org 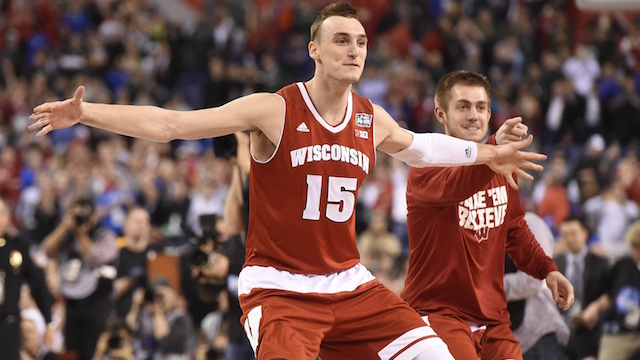 NCAA Final Four: Duke and Wisconsin to Square Off For National Championship

The Duke Blue Devils and Wisconsin Badgers will play for the 2015 NCAA Men’s Basketball Championship after winning their Final Four national semifinals Saturday night in Indianapolis. Duke knocked off Michigan State 81-61 while Wisconsin derailed Kentucky’s perfect season in a 71-64 thriller.

Duke weathered an early Michigan State run to dominate the rest of the game and cruise to a 20 point victory in the first semifinal of the Final Four. The Blue Devils had solid contributions all around, with three players scoring in double figures. Justise Winslow led the way with 19 points, while Jahill Okafor added 18 and Quinn Cook pitched in with 17. The Spartans got off to a hot start beyond the arc, but grew cold down the stretch and ended up hitting just 40% of their field goal attempts. Duke will head to the national championship with a shot at their 5th title, including the chance at winning their 3rd title under Mike Krzyzewski in Indianapolis. The Blue Devils’ first title under Coach K came in Indy in 1991 and their last title in 2010 was crowned at Lucas Oil Stadium as well.

But the headlines would end up being devoted to Wisconsin, as they took down undefeated Kentucky in the second semifinal of the night. The Badgers got revenge for last year’s semifinal loss to the Wildcats by handing them their first loss on the season and ending their shot at a perfect championship season. Frank Kaminsky came up huge for Wisconsin, as he posted a double-double with 20 points and 11 rebounds to help spark the Badgers to victory. While it looked like some questionable officiating would derail a classic game for both sides towards the end of the 2nd half, the referees’ calls in the end did not play as much of a factor as it could’ve been if the game ended two or so minutes earlier. Kentucky was unable to answer a Wisconsin run and would suffer a crushing defeat. Instead of prepping for a chance at 40-0 and a national title against fellow powerhouse Duke, John Calipari and his Wildcats leave Indianapolis 38-1 without any hardware.

Tonight will be a rematch of an early season matchup between Duke and Wisconsin. Duke won the first matchup in Madison in December 80-70. With both teams playing excellent basketball to get to the title game, it could be a very exciting game for fans, even without the high-profile Kentucky-Duke showdown many were anticipating. Duke will aim for their 5th national title while Wisconsin will go for their 2nd. Duke’s last title game in Indianapolis in 2010. Wisconsin will attempt to end a long drought, as they have not won a NCAA Men’s Basketball championship since 1941. A win tonight would also be head coach Bo Ryan’s first national championship.

The Final Four will conclude tonight at 9 pm EST. CBS will have the game telecast.