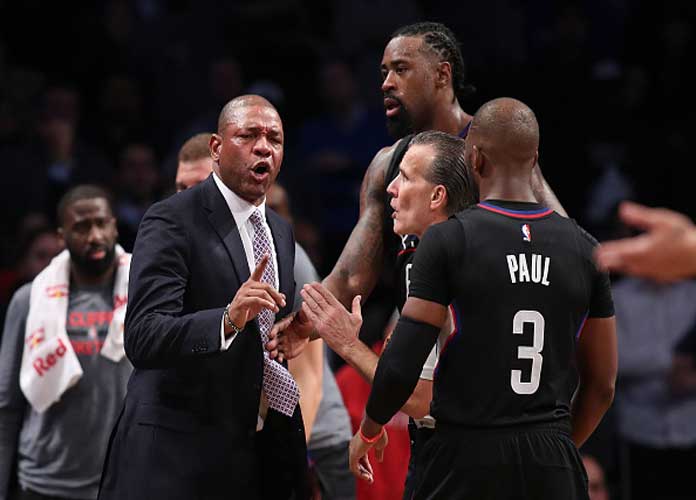 On Wednesday night, NBA teams and coaches took it to the court to protest the United States Capitol riot, as well as a decision by a Wisconson prosecutor not to charge the police officer who shot Jacob Blake last year. A total of 11 games were played across the country despite the unrest occurring in Washington D.C.

One of those games took place less than a mile away from the Capitol Building as the Washington Wizards faced off against the Philadelphia 76ers at Capital One Arena. Both players and coaches from both teams addressed the riot that occurred earlier that day as Congress gathered to certify the results from the 2020 election.

“It’s pretty disturbing and sad,” Rivers told reporters. “What it’s not is an ‘attack on democracy.’ It’s not. … Democracy will prevail. It always does. It shows a lot, though.”

“2021 is a new year, but some things have not changed,” the Heat-Celtics statement said. “We played [Wednesday’s] game with a heavy heart after [Tuesday’s] decision in Kenosha, and knowing that protesters in our nation’s capital are treated differently by political leaders depending on what side of certain issues they are on.”

The Milwaukee Bucks and the Detroit Pistons faced off at Fiserv Forum on Wednesday night. They also kneeled in the act of protest of the riot and the Blake decision right after their game tipped off.

“I stand for change,” Bucks center Giannis Antetokounmpo told reporters. “As my team, we stand for change. Whenever we see something that’s not right, we are going to speak up and use our platform the right way.”

“All I can say is that I’m grateful knowing that hopefully, nobody who looks like me is going to Capitol Hill to respond to this, because if they do, you’ll see a different response by law enforcement. You know it – and I know it,” Roberts told ESPN.

Five NBA games are still set to be played on Thursday. The Wizards aren’t scheduled to play a home game until they host the Heat on Saturday in Washington, D.C.