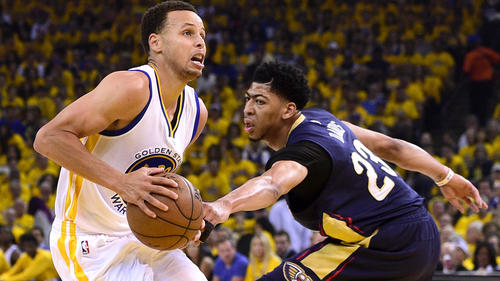 The 2015 NBA Playoffs are underway after a weekend of Game 1 action. All but one of the top seeds held serve to kick off their series, but many got a much tougher game than they were expecting from their underdog opponents. With the exciting fresh crop of teams as favorites to win the Larry O’Brien Trophy, these NBA Playoffs got underway with plenty of intrigue and with a set of games that didn’t disappoint.

Things kicked off on Saturday with an overtime thriller as the Washington Wizards broke home-court advantage and defeated the Toronto Raptors 93-86. After surviving Toronto’s fourth quarter comeback, Washington played relentless defense in the extra frame to hold the Raptors to just 4 points. Neither team shot the ball well all game, as Washington hit at a 39.4% shooting percentage to Toronto’s 38%, but it was still enough to provide fans with the first overtime game of the NBA Playoffs.

In one of the most anticipated 1-vs-8 matchups in years, thanks in part to rising stars Stephen Curry and Anthony Davis, the Golden State Warriors took Game 1 by holding off a late charge by the New Orleans Pelicans in a 106-99 win. Curry and Davis both rose up to the occasion, with Davis scoring 35 points for the Pelicans and Curry 34 for the Warriors.

In Saturday night action, the Chicago Bulls took care of business in a 103-91 win over the Milwaukee Bucks. The Bulls were led by Derrick Rose, playing in his first playoff game since 2012 due to injury, as he put on an MVP-like performance in the victory. The Houston Rockets also got a win on home court to start their series by taking down the Dallas Mavericks 118-108. James Harden had 24 points and 11 assists to help secure the victory for Houston.

Sunday’s action had the home team each win their games to take 1-0 series leads, but the expected storylines in each series didn’t seem to pan out. The Cleveland Cavailers got the win over the Boston Celtics 113-100 behind Kyrie Irving’s 30 points and LeBron James’ 20 points and 7 assists. However, the Brad Stevens coached Celtics made a game out of it in a series that’s expected to go heavily in the Cavs’ favor. Likewise, the Atlanta Hawks got their easily expected Game 1 win to open up their series against the Brooklyn Nets. The margin of victory was much less than anyone expected, though, as the Hawks would only win by seven in a 99-92 game.

Out in the Western Conference, the Memphis Grizzlies-Portland Trail Blazers series, which many see to be a toss-up, went heavily in Memphis’ favor in Game 1. The Grizzlies put on a dominating performance to win 100-86 in a game that was out of reach early on. And in the series basketball fans couldn’t wait to start, the Los Angeles Clippers looked extremely impressive by handling the defending champion San Antonio Spurs 107-92. Chris Paul put in 32 points to lead the way in a shockingly easy victory for the Clippers.

The NBA Playoffs continue with two games on Monday night. The Bucks and Bulls will once again meet at United Center for Game 2 while the Pelicans and Warriors square off in Oakland later in the night.

Read more about:
basketball NBA NBA Playoffs
Listen to the uInterview Podcast!
Get the most-revealing celebrity conversations with the uInterview podcast!