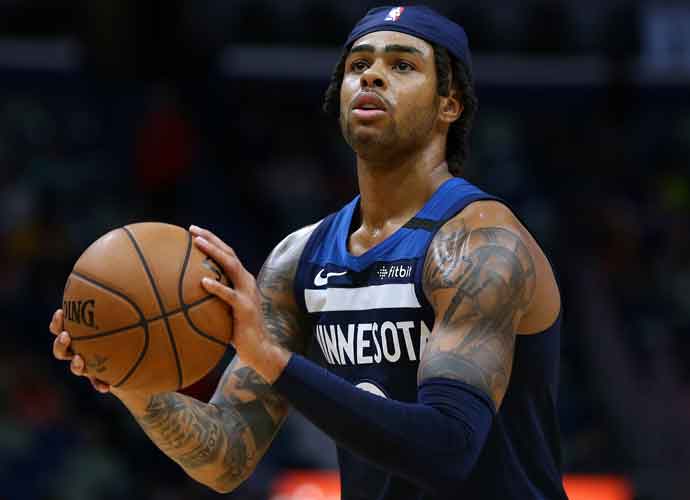 NEW ORLEANS, LOUISIANA - MARCH 03: D'Angelo Russell #0 of the Minnesota Timberwolves shoots against the New Orleans Pelicans during the second half at the Smoothie King Center on March 03, 2020 in New Orleans, Louisiana. NOTE TO USER: User expressly acknowledges and agrees that, by downloading and or using this Photograph, user is consenting to the terms and conditions of the Getty Images License Agreement. (Photo by Jonathan Bachman/Getty Images)

If you want to go contrarian at the position with the most studs, Holiday is your guy. Most people will be rostering Luka Doncic, Stephen Curry, Malcolm Brogdon and other studs, but the cheaper Holiday has almost as much upside tonight. Over his last six games, Holiday is averaging more than 40 fantasy points per game. Not to mention, he faces off against a Hornets defense tonight that ranks in the bottom-third of the league in defensive efficiency. The last time these two teams met, Holiday posted 45 fantasy points. Considering he can be had for less than $8,000, he could be an absolute steal on DraftKings. As long as the Hornets are able to stay close to the Bucks in this contest, Holiday will see a high usage rate and be asked to shoulder a large offensive load as Milwaukee battles for the top seed in the Eastern Conference.

This is a game that you are going to want to target, considering both teams rank in the top-third of the NBA in pace. They also both rank near the bottom of the league in defensive efficiency. The implied point total for this game is 230.5 points, with Minnesota just 1.5-point favorites. You won’t have to worry about a blowout causing Russell to only play 20 minutes. He will surely see 30-plus minutes. Russell is also coming off a huge night against the Jazz, in which he scored 27 points and dished out 12 dimes for a total of 53 fantasy points. The Rockets give up the second-most fantasy points overall, and are particularly rocky on defense against opposing guards. Roster Russell with confidence tonight.

The Celtics will not only be without point guard Kemba Walker tonight, but more importantly, Jayson Tatum will sit out the front end of a back-to-back set tonight. The Celtics are still huge favorites over the tanking Thunder, who are now the league’s most generous fantasy opponent. The Thunder rank first in turnover rate and 25th in defensive efficiency. Brown should play an enormous role for Boston tonight. He is usually good for 35-50 fantasy points, and tonight I see him finishing with closer to 50.

There are tons of injuries at this position and while I would love to roster Giannis Antetokounmpo, I like Washington at his price tag, especially on this small six-game slate. Washington has been balling out, picking up the slack for a Hornets team that is without LaMelo Ball and Gordon Hayward. In his last outing, Washington posted 22 points, 12 rebounds, five assists, a block and a steal for 51.5 fantasy points. He has now scored at least 22 real points in four of his last five outings. Although the matchup isn’t great on paper, Washington is averaging 32 fantasy points per game against the Bucks this season. And now he is playing heavier minutes as the Hornets cling onto their postseason hopes.

Nurkic isn’t a sneaky pick anymore, but I think most DFS players are going to try to roster KAT tonight if possible. While I think KAT will have an excellent night, I like Nurkic’s value a bit more tonight after he has finally rounded back into form. He has dropped 53-plus fantasy points in back-to-back contests and is averaging a ridiculous 21 points and 18 rebounds per game over that span. Now he gets to face a beat-up Pacers frontcourt that will be without Myles Turner and Domantas Sabonis. Even Goga Bitadze is questionable to suit up. Nurkic could very well dominate yet again, especially with Damian Lillard going through a bit of a slump.