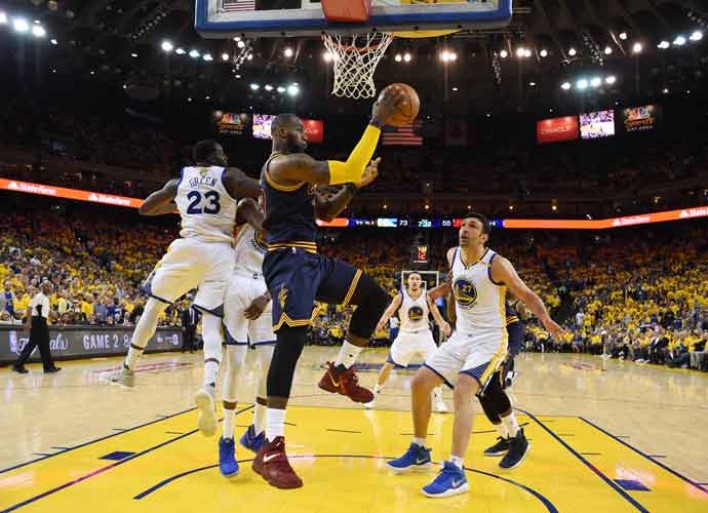 OAKLAND, CA - JUNE 01: LeBron James #23 of the Cleveland Cavaliers looks to pass the ball against the Golden State Warriors in Game 1 of the 2017 NBA Finals at ORACLE Arena on June 1, 2017 in Oakland, California. NOTE TO USER: User expressly acknowledges and agrees that, by downloading and or using this photograph, User is consenting to the terms and conditions of the Getty Images License Agreement. (Photo by Kyle Terada/Pool/Getty Images)

The NBA on Monday unveiled the full schedule for the 2017-2018 regular season, which will begin Oct. 17 with Boston at Cleveland and Houston at Golden State and end with a 12-game night on April 11.

The same night as their opener, the reigning national champion Warriors will raise their second championship banner in three years and will also receive their championship rings.

The league’s regular season has been extended by a full week compared to previous years in order to ensure greater player rest and health, commissioner Adam Silver and his staff said. The earlier season start means there will be no more scenarios in which teams play four games in five-day stretches.

Four years ago, there were 70 such scenarios and the NBA reduced the number of them from 27 to 20 to zero.

In addition, back-to-back games have been cut to 14.4 per team, down from 16.3 last season (A total of 57 back-to-backs were eliminated).

The league also protected 22 “marquee” nationally televised games in which participating teams will not play a back-to-back or five games in seven nights. Furthermore, no team will be forced to travel more than 3,500 miles during the seven days prior to any of these games.

These 22 games include the five Christmas Day games, all Saturday and Sunday ABC games and the three Martin Luther King Jr. Day games.

This year’s NBA schedule will also be labeled by week, with 26 weeks in total.

The Christmas Day schedule kicks off with the New York Knicks hosting the Philadelphia 76ers at Noon on ESPN. The long-awaited Finals rematch between the Cavaliers and Warriors in Oakland leads off an ABC triple-header at 3 p.m. ET, followed by the Washington Wizards visiting the Celtics at 5:30 p.m. ET and the Rockets visiting reigning Kia MVP Russell Westbrook and the Oklahoma City Thunder at 8 p.m. ET. The Minnesota Timberwolves and rookie guard Lonzo Ball and the Los Angeles Lakers close out the day on TNT at 10:30 p.m. ET.

NBA TV’s regular-season coverage starts Oct. 21 with a doubleheader featuring the Warriors against the Grizzlies in Memphis at 8 pm EST, and then the Phoenix Suns visiting the Los Angeles Clippers at 10:30 pm EST.

OAKLAND, CA – JUNE 01: LeBron James #23 of the Cleveland Cavaliers looks to pass the ball against the Golden State Warriors in Game 1 of the 2017 NBA Finals at ORACLE Arena on June 1, 2017 in Oakland, California.