Nationals Tie MLB Record With Five Homers In One Inning In 15-2 Rout Of Brewers - uSports.org 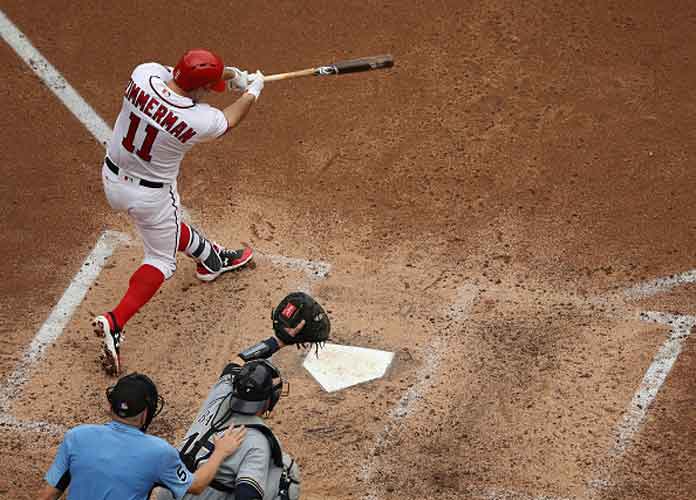 Ryan Zimmerman #11 of the Washington Nationals

The Washington Nationals smacked five home runs in one inning against the Milwaukee Brewers at Nationals Park on Wednesday afternoon to tie a major league record.

After the fourth (back-to-back-to-back-to-back) homer in the frame, the Nats had already made history by marking the eighth time in MLB history any team has achieved this feat and the first since 2010. The MLB record for most homers in a game is ten, and the National League mark is nine. Washington thrashed Milwaukee 15-2 in the closer of the three-game series, which the Nationals (61-39, 1st in National League East) won 2-1.

The five homers came in the bottom of the third against Brewers starter Michael Blazek.

Washington right-hander Max Scherzer drew a walk to open the inning, and then left fielder Brian Goodwin homered to right field. Wilmer Difo followed with a deep hit to right-center field. After that, Bryce Harper blasted one over the wall in left center, and then Ryan Zimmerman belted his own homer to left center. Following a Daniel Murphy flyout that led to derisive boos from the Washington crowd, Anthony Rendon smacked one over the wall in left-center for the hosts’ fifth homer of the frame.

The Nationals are now the sixth team to hit five homers in an inning. Incidentally, the Brewers were the last team to accomplish this feat in 2006.

Scherzer also set a personal record on Wednesday by earning 200 strikeouts for the sixth straight season, the longest active streak in the majors. The righty, who turned 32 on Thursday, later said he was very pleased with his team’s offensive performance.

“Yeah, what a birthday gift,” he said. “I said coming in here I wanted to get a win and a knock. So the guys showed up today, put an ungodly amount of runs up there, 15 runs, oh man, what a pitcher’s best friend.”

Yesterday we unveiled the @AllStarGame logo.

Harper and Zimmerman each scored two of Washington’s eight home runs — all of which came in the first four innings — on Wednesday. Those eight round-trippers tied the franchise record set by the Montreal Expos in 1978.

“It’s like you almost can’t believe it, and we’ll take it,” Washington manager Dusty Baker said. “The guys, I mean, that was some kind of inning and then the next inning also, so we had a big offensive barrage today, gave Max a birthday present, and he’ll always take that. We preserved our bullpen, so it was just a good day overall.”

The Nationals are 13 games ahead of the Atlanta Braves for the lead in the NL East. They next host the Colorado Rockies on Friday at 7:05 pm EST for the opener of a three-game series.