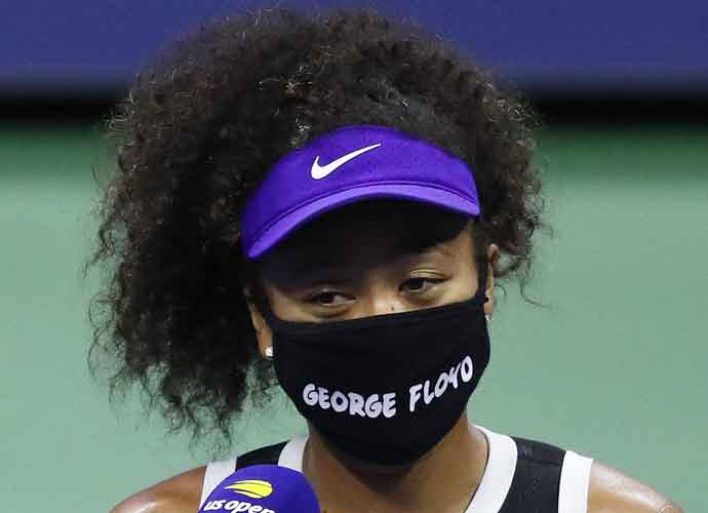 NEW YORK, NEW YORK - SEPTEMBER 08: Naomi Osaka of Japan wears a mask with the name of George Floyd on it during an interview following her Women’s Singles quarter-finals match win against Shelby Rogers of the United States on Day Nine of the 2020 US Open at the USTA Billie Jean King National Tennis Center on September 8, 2020 in the Queens borough of New York City.

In her post-match interview, after her 6-3, 6-4 win over Shelby Rogers at the U.S Open, tennis star Naomi Osaka was moved by messages from the parents of two shooting victims Ahmaud Arbery and Trayvon Martin. Sybrina Fulton, Martin’s mother, said, “I just want to say thank you to Naomi Osaka for representing Trayvon Martin on your customized mask. We thank you from the bottom of our hearts. Continue to do well, continue to kick butt at the U.S. Open.”

Ahmaud Arbery’s father, Marcus Arbery, Sr., said, “Thank you for the support on my family and God bless you for what you’re doing and you’re supporting our family with my son. And my family really, really appreciates that and God bless you.”

Osaka, who was visibly struck by these messages and holding back tears became reflective of her role in social justice as a prominent athlete. “I don’t know. I feel like I’m a vessel, at this point, and in order to spread awareness and, hopefully, it’s not going to dull the pain, but hopefully, I can, you know, help with anything that they need.”

In what has been a strange U.S. Open with many upsets and other odd disqualifications, this is a bright spot in an unusual sporting event. While the Open has not been the spectacle for social justice like the NBA has been, this was a powerful moment that brought the message of social justice and Black Lives Matter to the wider audience of tennis. Osaka is set to play Jennifer Brady in the semifinals on Thursday.