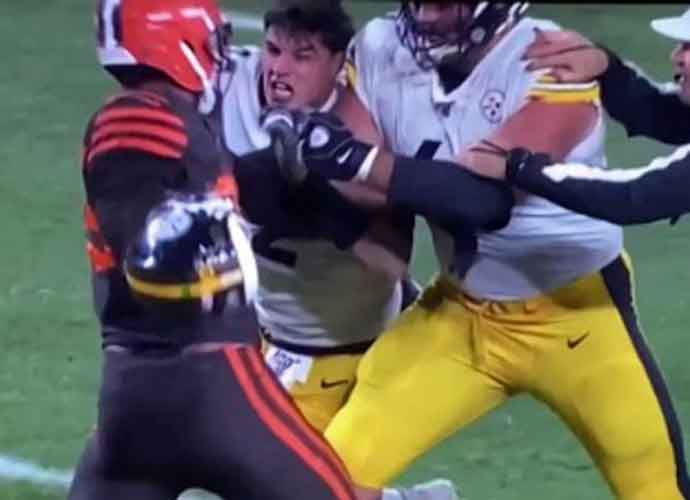 They might have won the game, but they lost a star. Cleveland Browns defensive end Myles Garrett could be facing a season-end suspension or more due to a fight with Pittsburg Steelers’ quarterback Mason Rudolph on Thursday night.

Rudolph was having a particularly hard time with the Browns defense all game, getting sacked four times and intercepted four times as well, none by Garrett (although credit Garrett for many of his rushed throws that led to the picks). Rudolph doubled his interception numbers in one night, coming in with 11 touchdowns to four interceptions in his previous seven games.

The incident happened in the last eight seconds of the game during a Rudolph throw. Garrett delivered a hit right after the throw, but apparently Rudolph didn’t like the hit; or maybe something said or extended after the hit. The two were on the floor together, Garrett on top of Rudolph with his helmet facing his as if interacting. The tackle lasted probably a second longer than it could have, and that’s when Rudolph started pushing at Garrett and appeared to be going at Garrett’s helmet.

Myles Garrett just committed actual assault on the football field. Get him out of here for the SEASON. pic.twitter.com/a7pkN6HZeg

At that point, Garrett grabbed Rudolph by the armpit corners of his jersey, then went for his helmet and took it off. He held on to the quarteback’s hemlet as Rudolph went to try and get it back. With one of the offensive linemen between them, Garrett swung upwards and around the offensive lineman’s arms at Rudolph hitting him on the side of the head. The hit could have been even worse if Rudolph would not have reacted in time to move the center of his head away from the blow.

After that, Steelers center Maurkice Pouncey who was on his way over, grabbed Garrett and started punching him and kicking him while on the floor with the offensive lineman on top of him.

Anyone that watches football knows that fights are regular. But someone trying to hit another player with a helmet on his uncovered head has not been seen either in awhile — or ever. The act has been widely condemned by all, including his own team, Browns QB Baker Mayfield making a statement as well.

“I didn’t see why it started, but it’s inexcusable. I don’t care, rivalry or not, we can’t do that,” Mayfield said. “That’s kind of the history of what’s been going on here lately, hurting yourself. That’s endangering the other team.

“That’s inexcusable. He knows that. Well, I hope he does now. It’s tough. We’ll see.”

The NFL stated that Garrett will be suspended indefinitely and, “at a minimum for the remainder of the regular season and postseason,” per NFL Senior VP of Football; International Communications Michael Signora.

A three game suspension was also handed down to Steelers center Pouncey for the punches and kicks on Garrett, and Browns defensive tackle Larry Ogunjobi will serve a one game suspension for throwing Rudolph to the ground as well.

The actions and loss of Garrett are a major blow to the Browns, who made a statement this game, after coming in with a 3-6 record. They were chosen in many circles to make a playoff rush with a talented young quarterback, and two of the best receivers in the game in Jarvis Landry and Odell Beckham, Jr. joining the team.

Now they will be without their All-Pro, Pro-Bowl defensive end who is a cornerstone for the solid defense that held the Steelers to seven points and the Buffalo Bills to 16 a week earlier.

Rudolph’s lawyer stated that he is not ruling out charges, but neither the NFL nor the authorities were pursuing the matter criminally as charges have not been filed.