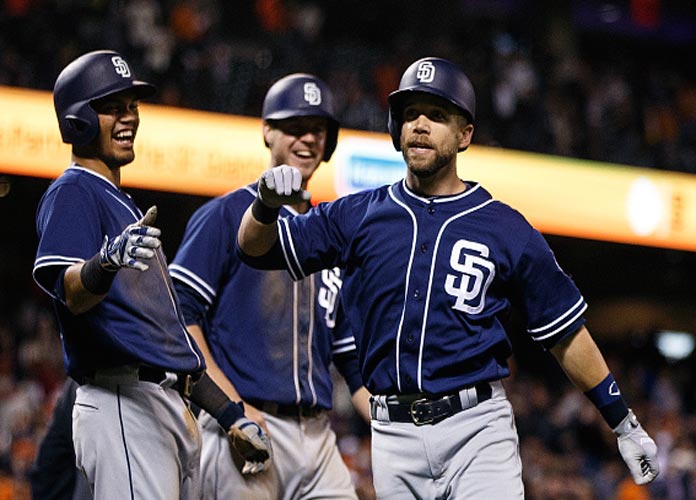 Major League Baseball has suspended San Diego Padres general manager A.J. Preller for 30 days without pay for his conduct in the trade of All-Star pitcher Drew Pomeranz to the Boston Red Sox.

The commissioner’s office announced the suspension on Thursday, but did not state in detail what Preller did wrong.

The general manager becomes the first non-uniformed personnel to be publicly suspended since the late Marge Schott, former owner of the Cincinnati Reds. Schott was banned for two years in 1996-1997 for expressing racial and ethnic slurs.

Despite the severity of the punishment, Preller will not be fired or receive further discipline, a high-ranking club official told USA TODAY Sports.

The official spoke to USA TODAY Sports only on condition of anonymity because of the private nature of their internal conversations.

The Padres traded Pomeranz to the Red Sox on July 14 for right-handed prospect Anderson Espinoza.

MLB, which completed their investigation on Thursday, assessed that the Padres did not include Pomeranz’s entire medical records when they traded him to Boston. The Red Sox filed an official complaint with MLB shortly after the trade.

Preller said in a statement that he takes full responsibility for his actions.

“I accept full responsibility for issues related to the oversight of our medical administration and record keeping,’’ Preller said in a statement. “I want to emphasize that there was no malicious intent on the part of me, or anyone on my staff, to conceal, information or disregard MLB’s recommended guidelines.

“This has been a learning process for me. I will serve my punishment and look forward to being back on the job in 30 days.’’

At least one other team front-office executive insists the medical information was intentionally withheld, which led to Commissioner Rob Manfred’s harsh penalty.

Two other MLB teams– the Miami Marlins and Chicago White Sox– questioned the veracity of their records in summer trades with the Padres. The Marlins acquired pitchers Andrew Cashner, Colin Rea and Fernando Rodney, and the White Sox acquired James Shields.

While Pomeranz and Shields have stayed with Boston and Chicago, respectively, Rea was diagnosed with elbow ligament damage that may require Tommy John surgery. According to Marlins officials, Rea said he had been receiving treatment on his elbow for weeks prior to the deal. Rea was sent back to the Padres.

“We accept the discipline handled down from Major League Baseball and will fully comply with Commissioner’ Manfred’s recommendations pertaining to change with our medical administration and record keeping,’’ Padres CEO Ron Fowler, managing partner Peter Seidler and CEO Mike Dee said in a joint statement. “Rest assured, we will leave no stone unturned in developing comprehensive processes to remediate this unintentional, but inexcusable, occurrence.

“To be clear, we believe that there was no intent on the part of A.J. Preller or other members of our baseball operations staff to mislead other clubs.

“We are obviously disappointed that we will lose A.J.’s services for 30 days, but will work closely with him upon his reinstating to ensure that this unfortunate set of circumstances does not happen again.’’

Yet, considering Preller’s previous errors, one more strike could earn him a year-long suspension, and possibly even termination. This is Preller’s second suspension. Preller, hired in August, 2014 as the Padres’ GM, was also privately suspended by MLB in 2010 while he was an assistant GM with the Texas Rangers for violating international signing rules. He also was fined last summer by MLB for an illegal workout in Aruba.

The Padres have missed the playoffs for the 10th straight year, and are 4th in the NL West with a 62-84 record.