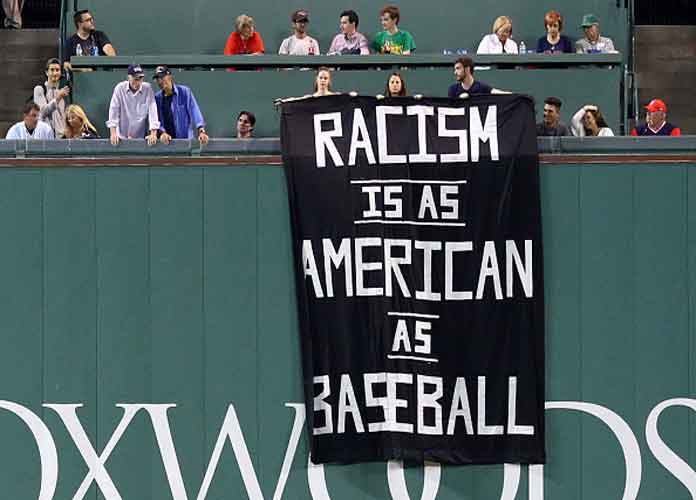 BOSTON, MA - SEPTEMBER 13: A banner with the message 'Racism is as American as baseball' is draped over the Green Monster during the fourth inning of the game between the Boston Red Sox and the Oakland Athletics at Fenway Park on September 13, 2017 in Boston, Massachusetts. (Photo by Maddie Meyer/Getty Images)

In a statement, MLB commissioner Rob Manfred said that after conversations with players, staff, officials and teams, he had concluded that “the best way to demonstrate our values as a sport is by relocating this year’s All-Star Game and MLB Draft.”

MLB announces that 2021 All-Star Game will not be played in Atlanta: pic.twitter.com/tVxhCP3mbN

The league is still finalizing where the All-Star Game will take place instead of Atlanta.

Earlier this week, Manfred strongly hinted that he was considering moving the game, but he had not made any promises or commitments.

“I am talking to various constituencies within the game and I’m just not going beyond that in terms of what I would consider or not consider,” Manfred said at the time.

Executive Director of MLB Players Association Tony Clark admitted that the union was willing to discuss pulling the All-Star Game altogether. The game was scheduled for July 13 at Alanta’s Truist Park, home of the Atlanta Braves.

Due to a new voting law in Georgia that will have a poor impact on people of color, President Joe Biden joined other voices in the call for Major League Baseball to pull the game from Atlanta. Just before the first pitch was thrown on opening day, Biden said he would “strongly support” moving the All-Star Game out of Atlanta.