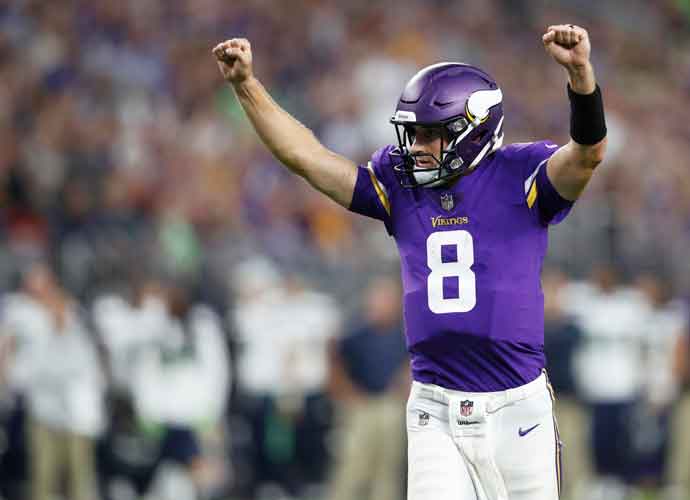 MINNEAPOLIS, MN - AUGUST 24: Kirk Cousins #8 of the Minnesota Vikings reacts after a touchdown during a preseason game against the Seattle Seahawks at U.S. Bank Stadium on August 24, 2018 in Minneapolis, Minnesota. (Image: Getty)

The Vikings once again had a solid year in 2019, they went 10-6, upset the Saints in the Wild Card round, and then got blown out by 49ers in the divisional round. 2019 saw the possible birth of primetime Kirk Cousins, as the team went 3-2 in games played after 7:00 p.m. CST. Although on paper that might not look great, you have to remember that Cousins played terrible in primetime games prior to 2019. Dalvin Cook said that he is going to hold out until he gets a new contract which is slightly concerning as he is a top-7 running back in football, but I am not too worried that he will miss significant time. The Vikings’ offensive line is one of the best in football, Adam Thielen is now a clear cut number one wide receiver. I loved the pick of Justin Jefferson out of LSU in the first round of this year’s draft. Their defense is arguably one of the best in football. Danielle Hunter is an elite pass rusher, but Anthony Barr and Eric Kendricks hold down the middle of the field at linebacker. My one concern is the secondary. Harrison Smith is getting up there in age, they released Xavier Rhodes and replaced him with Jeff Gladney who they took in the draft this year. There really is not a lockdown guy in their secondary to handle receivers like Davante Adams, Tyler Lockett, D.K. Metcalf, Julio Jones, Mike Evans, Chris Godwin, and Michael Thomas, among other elite wide receivers who the Vikings will face in 2020. Head coach Mike Zimmer will have his hands full trying to repeat this team’s success from 2019 in 2020, but it is not impossible.

Looking at the Vikings’ schedule, it will be tough for them this season, at least in my opinion. five of their 16 opponents made the playoffs last season (Packers, Titans, Texans, Seahawks, and Saints). It goes deeper than that however, as they also will play teams like the Colts, Falcons, Cowboys and Buccaneers, who all look to be better this year than last and have an eye on the playoffs. Prior to their bye week in Week 7, their schedule really is not all that favorable. I personally don’t see them winning more than three games out of the six. The reason why is because the Vikings ranked toward the middle, to bottom half in the NFL is total yards per game allowed, passing yards allowed per game, and rushing yards allowed per game, and the teams prior to their bye week have some really dynamic offenses. After their bye week, there are some easier opponents, at least on paper, with teams like the Lions and Bears, who they will play twice each, the Panthers and Jaguars. In those six games I can see the Vikings going 4-2, 5-1 and that can give them a chance of the playoffs. The Vikings also have a three-week stretch from Week 11 to Week 13 where they will play all their games at home. If the Vikings can perform well during that stretch, there could be some momentum that they can carry to the final four games of their season, which will see three of those four games on the road.

Because they are a playoff team from a year ago, the Vikings will be a team of high intrigue this season and I will be eager to watch them. Here are the five Vikings games I think you should attend in 2020:

These games are all very similar in that they will test the Vikings, specifically their defense. I mentioned earlier that the Vikings defense statistically was middle of the road, they never really jumped off the page and these five games will see if their defense can hold up against strong offenses. Week 1 against the Packers, although this game is at home, the odds are there will not be fans present because of COVID-19. Aaron Rodgers is still a really good quarterback in my opinion, Davante Adams can give the Vikings secondary fits and Aaron Jones will keep the defense honest with his running ability. This is one of those games though that the Vikings can pull out a win, as the Packers defense is worse than theirs. Week 3 against the Titans is simple Derrick Henry will run all over this team. Henry vs. Cook will be a showdown of two of the best running backs in the game and it will come down to which defense can make a play. Week 6 against the Falcons is the game I am most excited for on the Vikings’ schedule. In my personal opinion the Falcons have the most balanced offense of any of the five teams I have listed with Matt Ryan at quarterback, Calvin Ridley and Julio Jones on the outside, and Todd Gurley at running back. Being that this game is right before the Vikings’ bye week, if Minnesota gets beat badly, and limps into their bye week well below .500, there could be some serious changes to that team and coaching staff. Week 14 and Week 16 against the Buccaneers and Saints are similar for me, as both teams have dynamic passing attacks and with Tom Brady, Chris Godwin, Mike Evans and Rob Gronkowski on the Bucs and Drew Brees, Michael Thomas, Alvin Kamara and Emanuel Sanders on the Saints. That Saints game is also a rematch of last year’s Wild Card round where the Vikings beat the Saints in New Orleans in overtime, it is also on Christmas Day which would be extremely exciting. Both of these games come during the final four weeks of the season, where as mentioned the Vikings will play three of those four games on the road. If Minnesota is fighting for a playoff spot during those games, especially with one or both of those teams, they will be all the more crucial to win.