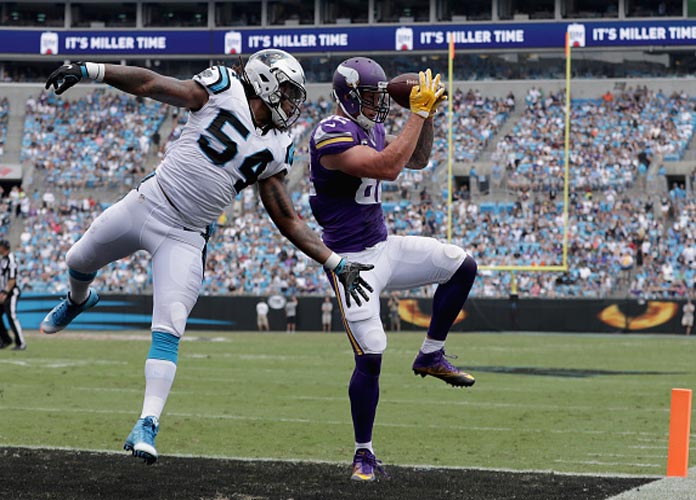 CHARLOTTE, NC - SEPTEMBER 25: Kyle Rudolph #82 of the Minnesota Vikings catches a touchdown pass against Shaq Green-Thompson #54 of the Carolina Panthers in the 3rd quarter during their game at Bank of America Stadium on September 25, 2016 in Charlotte, North Carolina. (Photo by Streeter Lecka/Getty Images)

The Minnesota Vikings have released long-time tight end Kyle Rudolph. Rudolph had been the longest-tenured player on the team prior to being released, and had spent all 10 of his seasons with the Vikings.

On Tuesday, the Vikings announced that they were releasing Rudolph from the team. In all of his seasons with Minnesota, the tight end recorded 4,488 receiving yards and 48 touchdown receptions. His numbers with the team assure that he will go down as one of the greatest tight ends to have played for the Vikings.

The decision to release the veteran tight end has to do with the salary cap for Minnesota. Releasing the veteran player has given the team $5 million in free cap space, but also $4.35 million in dead money.

With the long-time veteran gone, this leads to a vacant spot on the team’s depth chart at the tight end position. Currently, the Vikings have Irv Smith Jr. and Tyler Conklin as their main options. Last season, Smith Jr. tallied 365 receiving yards and five touchdown receptions. Conklin on the other hand only recorded 194 receiving yards and one touchdown. Smith Jr. seems like the likely beneficiary from the latest move out of Minnesota’s front office. He is likely the future of the tight end position for the Vikings.