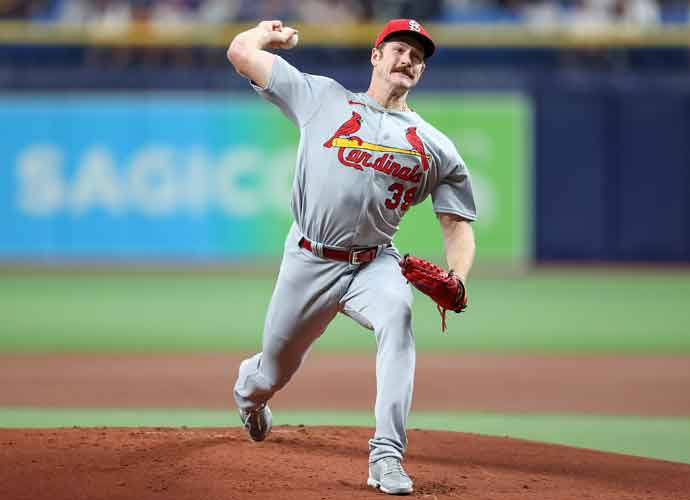 ST. PETERSBURG, FL - JUNE 9: Miles Mikolas #39 of the St. Louis Cardinals throws against the Tampa Bay Rays during the first inning of a baseball game at Tropicana Field on June 9, 2022 in St. Petersburg, Florida. (Photo by Mike Carlson/Getty Images)

2 outs, 2 strikes in the 9th…Miles Mikolas was THIS close to a no-hitter 😳 @BRWalkoff

St. Louis Cardinals pitcher Miles Mikolas was one strike shy of his first no-hitter against the Pittsburgh Pirates on Tuesday night. It was a 2-2 count when Mikolas delivered a curveball to rookie right fielder Cal Mitchell who then doubled into center field. Cardinals centerfielder Harrison Bader had a chance to play the ball, but it flew over his head and bounced over the centerfield wall.
Mikolas’ perfect game was broken up on his 129th pitch, his career-high, and the highest number of pitches thrown in the majors this season. He had thrown 115 pitches up until the ninth inning, however, first-year manager Oli Marmol allowed him to continue pitching in order to make history. Although Mikolas had been dealing with soreness in his pitching arm for the past few seasons, this was the 33-year-old’s fourth game this season with 100+ pitches. “I’m in the best shape of my life, so that’s no problem for me. That’s what starters train all year for, Going the distance is always the goal,” said Mikolas about his inflated pitch count.

The ninth inning was more of the same from Mikolas with him retiring Pirates’ catcher Michael Perez to third and infielder Tucupita Marcona on a flyball to right field. Mitchell then took the plate to break up Mikolas’ no-hitter. “I just tried to take some deep breaths,” said Mitchell. “The crowd was loud. They were all rooting for their guy. I’m glad I was able to settle myself down enough to have a composed at-bat and come through.”

The Cardinals gave their pitcher an immense offensive cushion taking away all of the pressure on him. Going into the ninth, St. Louis had a 9-1 lead after knocking back a couple of home runs early in the game and registering fourteen hits. As for the missed no-hitter, however, Mikolas said he felt he let the defense down by not being able to finish the perfect game. “It kinda stinks to not finish that out. I mean, I don’t have one yet, and I have friends that have one. It would have been nice to join that conversation. But I can’t say enough about our defense. We were everywhere we had to be and making fantastic plays all game. I kinda feel like I let them down after all that defense I got.”

No Cardinals pitcher has thrown a no-hitter since Bud Smith did it in 2001.