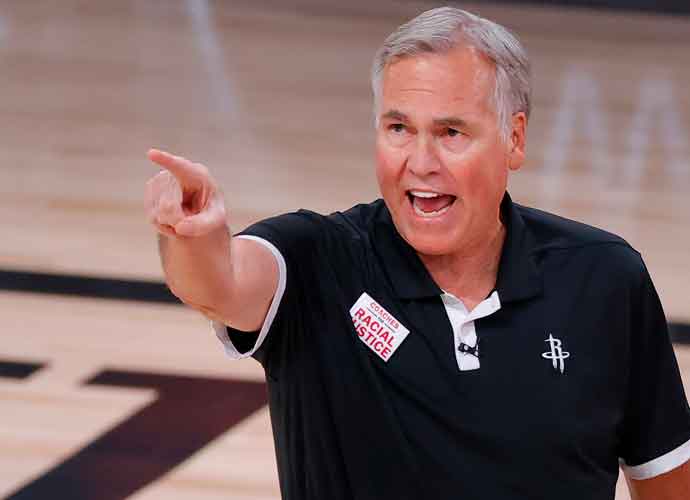 LAKE BUENA VISTA, FLORIDA - AUGUST 24: Mike D'Antoni of the Houston Rockets reacts during the third quarter against the Oklahoma City Thunder in Game Four of the Western Conference First Round during the 2020 NBA Playoffs at AdventHealth Arena at ESPN Wide World Of Sports Complex on August 24, 2020 in Lake Buena Vista, Florida. NOTE TO USER: User expressly acknowledges and agrees that, by downloading and or using this photograph, User is consenting to the terms and conditions of the Getty Images License Agreement. (Photo by Kevin C. Cox/Getty Images)

Mike D’Antoni, current assistant coach for the Brooklyn Nets, is reported to have a strong interest in fulfilling the current head coaching vacancy at the Portland Trail Blazers.

The 70-year-old coaching veteran has an impressive, lengthy résumé, including stints with the Suns and the Knicks. Notably, D’Antoni has developed a reputation for an electric brand of offensively focused basketball, one that is largely predicated on constant scoring – even if it is sometimes at the expense of strong defense. Conversely, the Trail Blazers have reiterated their desire to find a new successor for their head coaching vacancy that can build a team focused on lockdown defensive play. Regardless, it appears that the stark differences in expectations for playing style are not holding back either party in a possible union, as D’Antoni and the Trail Blazers have been widely reported to have a mutual interest in joining forces.

Mike D’Antoni has serious interest in the Portland Trailblazers position.

Source with knowledge of the situation tells @sam_amick. pic.twitter.com/xqRmfp40YK

D’Antoni will likely have a bevy of coaching options to choose from, as he is garnering interest from the Celtics and the Magic, among others. Part of this rise in D’Antoni taking the reins of another NBA team stem from a career in coaching marked not just by longevity, but also by success. D’Antoni oversaw some of the best years at the Suns in the early 2000s, leading them to multiple historic regular seasons and deep playoff runs. D’Antoni is also well-known for reshaping the playing style of James Harden while coaching the Houston Rockets, turning Harden into a prolific scorer and leading the franchise to multiple playoff appearances. D’Antoni’s most recent stop is with the Nets, where once again he has played an integral role in creating one of the strongest teams in the league.

D’Antoni is widely expected to interview for the Blazers’ head coaching position, among others, at the conclusion of Brooklyn’s current playoff run. Whether or not the Trail Blazers and D’Antoni end up inking a deal remains to be seen, although it is evident that Portland is a frontrunner for his services.