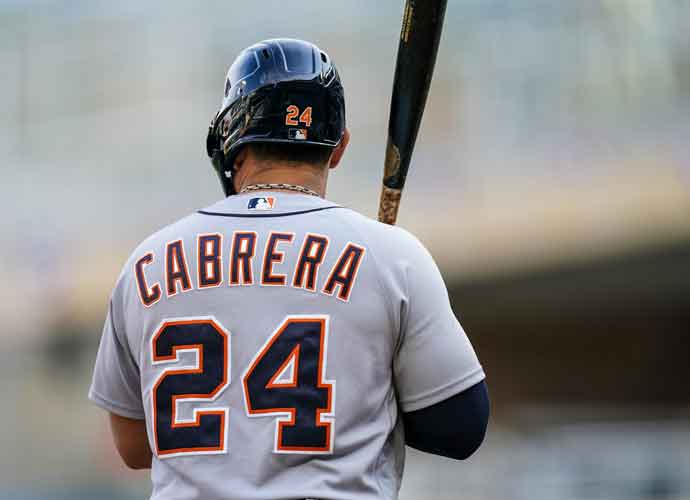 MINNEAPOLIS, MN - SEPTEMBER 06: Miguel Cabrera #24 of the Detroit Tigers looks on against the Minnesota Twins on September 6, 2020 at Target Field in Minneapolis, Minnesota. (Photo by Brace Hemmelgarn/Minnesota Twins/Getty Images)

Cabrera became the first Venezuelan and the 28th player to join MLB’s exclusive 500 home run club. The slugger achieved the feat by hitting a 1-1 changeup off Toronto starter Steven Matz to right field for a 400-foot solo home run in the sixth inning.

“It was nice timing because that tied the game,” Cabrera told reporters Sunday. “That was big for us because we came in trying to win the series.”

“As the first player in the 121-year history of the Detroit Tigers to accomplish this amazing feat, our organization is excited, proud, and thrilled to join you in celebrating this historic moment,” Tigers owner Christopher Ilitch said in a statement. “We thank you for the excitement you have brought to the game and the memories and joy you have brought to our fans. And all of us are rooting for you in the chase for your next milestone, 3,000 hits!”

Statement from Chairman and CEO of the Detroit Tigers, Chris Ilitch. pic.twitter.com/OKz5SVYKPU

Now that he achieved his 500th career home run, Cabrera sets his sights on reaching 3,000 career hits. Only 32 players have finished their careers with 3,000 hits. Cabrera currently has 2,955 career hits. He said it was his goal to reach 500 home runs and 3,000 hits in 2021. However, it seems unlikely he’ll reach the hit mark by the end of the regular season. The 38-year-old batter is currently signed to Detroit through 2023 and could join six players in the 3,000/500 club.