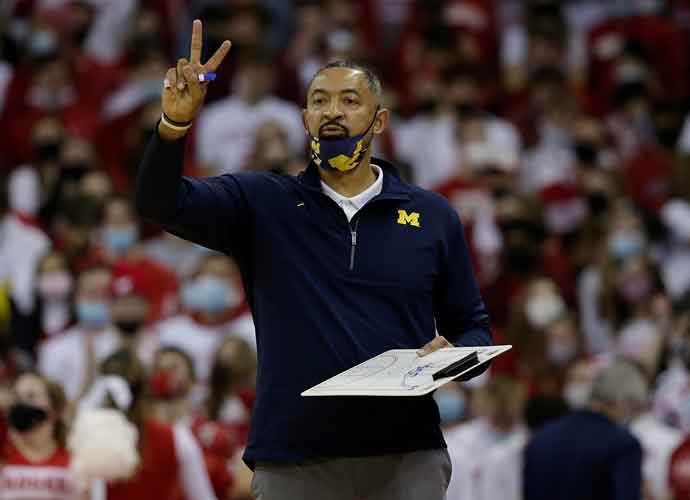 MADISON, WISCONSIN - FEBRUARY 20: Michigan Wolverines Head Coach Juwan Howard calls out a play during the second half of the game against the Wisconsin Badgers at Kohl Center on February 20, 2022 in Madison, Wisconsin. (Photo by John Fisher/Getty Images)

The fallout from Michigan men’s basketball coach Juwan Howard’s handshake-line shenanigans with the Wisconsin Badgers has arrived. The former Fab 5 star won’t be on the sidelines for the remainder of the Wolverines’ regular-season games.

In addition to the Big Ten-backed suspension—which does not include any postseason games—Howard was fined $40,000 for striking an opposing coach at the end of the teams’ Sunday tilt.

The Big Ten also fined Wisconsin coach Greg Gard $10,000 for the altercation, while Michigan players Moussa Diabate and Terrance Williams II and Wisconsin’s Jahcobi Neath were all suspended for one game for fisticuffs.

“Big Ten Conference coaches and student-athletes are expected to display the highest level of sportsmanship conduct,” Big Ten commissioner Kevin Warren said. “I am grateful for the partnership with Michigan Athletics Director, Warde Manuel and Wisconsin Athletics Director, Chris McIntosh. Our expectation is that the incident yesterday will provide our coaches and student-athletes with the opportunity to reflect, learn and move forward in a manner that demonstrates decorum and leadership on and off of the court.”

Howard struck Wisconsin assistant coach Joe Krabbenhoft in the face after Howard and Gard exchanged words during Sunday’s postgame handshake. The Wolverines lost, 77-63, and Howard was unhappy that Gard called a timeout with the game all but decided.

“After taking time to reflect on all that happened, I realize how unacceptable both my actions and words were, and how they affected so many. I am truly sorry,” Howard said in a statement. “I am offering my sincerest apology to my players and their families, my staff, my family, and the Michigan fans around the world. I would like to personally apologize to Wisconsin’s Assistant Coach Joel Krabbenhoft and his family, too.”

Read more about:
Juwan Howard Michigan Wolverines Wisconsin Badgers
Listen to the uInterview Podcast!
Get the most-revealing celebrity conversations with the uInterview podcast!