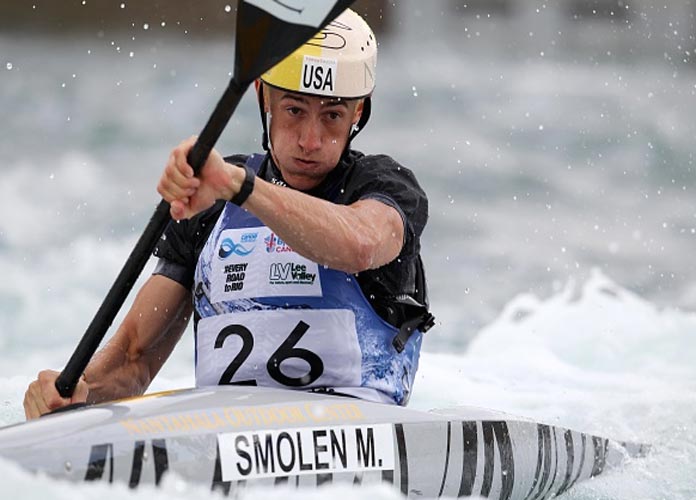 Michal Smolen, a member of the U.S. Olympic Canoe/Kayak Team who will be competing in the Games in Rio this August, discussed among other things how he generally stays healthy with uSports at the 100-Day Countdown celebration in New York’s Time Square on April 27.

“For us the key is to get enough sleep to be able to perform,” Smolen said. “We also travel a lot, so our sleep schedules are often irregular and we have to make sure that we eat healthy and just take the necessary precautions that you have to take when you travel into foreign countries.”

Although raised in Gastonia, North Carolina, Smolen was born in Krakow, Poland. The 22-year-old is coached by his father Rafal Smolen, who was on the Polish National Team.

Following his third-place finish at the 2015 ICF (International Canoe Federation) Canoe Slalom World Championships in London in September, Smolen not only qualified the U.S. an Olympic quota slot in the men’s single kayak (K1) event, he also took a dominating lead in the U.S. Olympic Team selection processes. At the first U.S. Olympic Team Trials in Charlotte, NC, Smolen solidified his spot on the US Olympic Team for the first time.

Smolen, who is nicknamed “Meesh,” boasts Nantahala Outdoor Center, Galasport, Sandiline, and PowerZone Trading as sponsors. His hobbies include mountain biking, climbing, and playing the guitar. His role model is Scottish slalom canoeist Campbell Walsh, 38, who has competed since the mid-1990s and whom Smolen calls a “little beast.”

“After so many years of setbacks and things I have had to overcome I finally feel my hard work and perseverance paying off,” Smolen wrote in his bio. “I finally feel content about all of the times I’ve kept going after I’ve felt like the world was telling me to give up. If there is one thing you take away from my journey as an athlete, please let it be the fact that I didn’t let anything get in the way of my success.”

He then continued: “I faced my challenges head on and didn’t let my fears, health problems, or the fact that I wasn’t ‘American enough’ stop me to continue chasing my dreams. No matter what you do in life, you will make your own path and don’t be surprised when obstacles get in your way. Success will come in one way or another if you’re willing to turn your weaknesses into strengths and learn from your every experience.”

VIDEO: US Olympic Bobsledder Sylvia Hoffman On Qualifying For Olympics