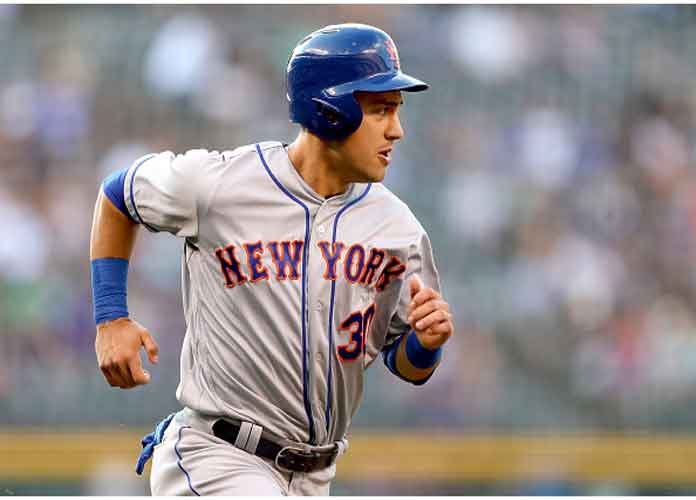 DENVER, CO - AUGUST 01: Michael Conforto #30 of the New York Mets scores on a Yoenis Cespedes double in the first inning agaoinst the Colorado Rockies at Coors Field on August 1, 2017 in Denver, Colorado.

Michael Conforto is picking up some interest among a few ball clubs after sitting out the entire 2022 season.

A total of three teams are in on the 31-year-old outfielder, reports Jon Heyman of the New York Post.

This includes the Miami Marlins, Chicago Cubs and Houston Astros.

While it’s unclear if there is a favorite to sign him, none of these teams have dramatically high payrolls.

The Astros have the highest at nearly $142 million.

In the shortened 2020 year, Conforto had arguably the best season of his career at the plate.

To make matters worse, he failed to sign with a team in free agency during 2022, as he was forced to miss all of 2022 after undergoing shoulder surgery.

But now his agent Scott Boras claims Conforto is “back to full health.”

Conforto will hope that whoever he wins up signing with that he will book a similar performance in 2020.

That could allow him to opt out next year and lead to him scoring a bigger long-term deal with the same or another ball club.

But in the meantime, his next contract could be worth two years at the north of $20 million, which could make sense for a budget team.

In terms of the best fit, the Astros are the top option if he’s looking to win a championship, which could help boost Conforto’s brand if he’s a major part of it.

But either the Cubs or Marlins would be the better alternatives if he’s looking to maximize his playing time.

We’ll see which team winds up pulling the trigger for Conforto but his next deal could be a bargain for a team if he returns to his 2020 form.