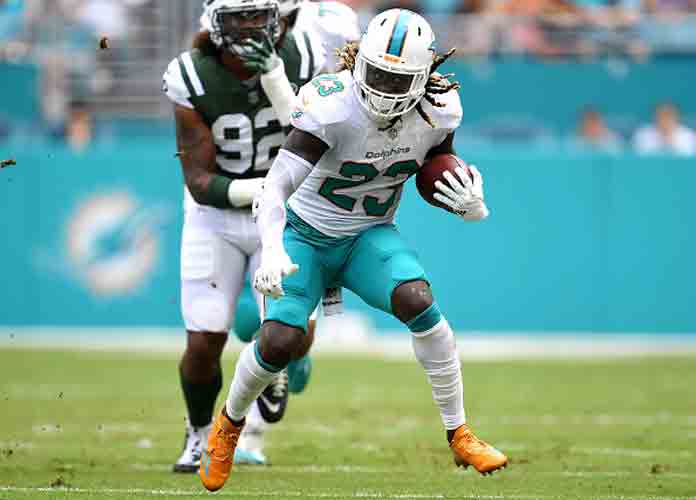 MIAMI GARDENS, FL - OCTOBER 22: Jay Ajayi #23 of the Miami Dolphins rushes during a game against the New York Jets at Hard Rock Stadium on October 22, 2017 in Miami Gardens, Florida.

In a powerful video released on Thursday, the Miami Dolphins announced that the team would remain in the locker room for their week one opener against the New England Patriots, calling out what they feel are hollow statements and promises from the NFL on social justice.

BREAKING NEWS: The@MiamiDolphins players will stay inside for both national anthems. They express their discontentment with what they call “fluff and empty gestures” by the @NFL pic.twitter.com/ghUktHhPt9

Here’s a full transcript of the poem read in the video:

Is it authentic? That’s the mystery. Or is it just another symbolic victory?

Now, there’s two anthems. Do we kneel or do we stand?

If we could just right our wrongs, we wouldn’t need two songs.

We don’t need another publicity parade.

So we’ll just stay inside. Until it’s time to play the game.

What happened to all the funds that were promised?

All of a sudden, we got a glass pocket?

The bottom line should not be the net profit.

You can’t open your heart when it’s controlled by your wallet.

Decals and patches, fireworks and trumpets. We’re not puppets.

Ask the pundits, and we shouldn’t have a say.

If you speak up for change, then I’ll shut up and play.

If we remain silent, that would just be selfish.

Since they don’t have a voice, we’re speaking up for the helpless.

It’s not enough to act like you care for the troops.

Millions for pregame patriotism, you get paid to salute.

“Lift Every Voice And Sing?” It’s just a way to save face.

Lose the mask and stop hiding the real game face.

So if my dad was a soldier but the cops kill my brother, do I stand for one anthem and kneel for the other?

This attempt to unify only creates more divide.

So, we’ll skip the song and dance. And as a team we’ll stay inside.

We need changed hearts. Not just a response to pressure. Enough. No more fluff and empty gestures.

We need owners with influence and pockets bigger than ours. To call up officials and flex political power.

When education is not determined by where we reside. And we have the means to purchase what the doctor prescribed.

And you fight for prison reform and innocent lives.

And you repair the communities that were tossed to the side.

And you admit you gain from it, and swallow your pride. And when greed is not the compass, but love is the guide.

And when the courts don’t punish skin color, but punish the crime.

Until then, we’ll just skip the long production and stay inside.

For centuries, we’ve been trying to make you aware.

Either you’re in denial, or just simply don’t really care.

It’s not a black/white thing. Or a left/right thing. Let’s clean the whole bird, and stop arguing about which wing.

So far the NFL’s push for social justice has not gone well with the Kansas City Chiefs and Houston Texans being booed by some fans before the season opener Thursday night during a moment of silence meant to bring attention to social justice.