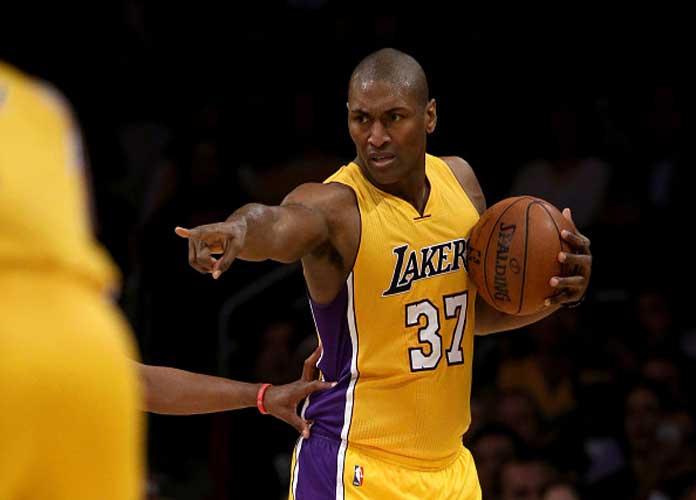 LOS ANGELES, CA - APRIL 06: Metta World Peace #37 of the Los Angeles Lakers points to a teammate during the first half of an NBA game against the Los Angeles Clippers on April 6, 2016 at Staples Center in Los Angeles, California.

Metta World Peace scored 18 points in what could potentially be his final game at the Staples Center to lead the Los Angeles Lakers to a 108-96 victory over the New Orleans Pelicans on Tuesday night.

The triumph marked the Lakers’ (26-55) fifth straight, their first such win streak since 2013.

World Peace let the shot clock run out in the last seconds of the game.

”There was no need to (shoot),” said the small forward, who hit four 3-pointers. ”We won the game. Five in a row. This is great.”

The 37-year-old Lakers star and 17-year NBA veteran, who changed his name to World Peace from Ron Artest in 2011, has not officially announced his retirement, but he received several standing ovations on Tuesday, even if he didn’t match Kobe Bryant’s 60-point finale last year.

Lakers coach Luke Walton said he would have loved to see World Peace take the final shot of the game for the team, although he understood why the forward didn’t, and praised the veteran for his classy attitude.

”You don’t want to disrespect the other team at all,” Walton said. ”Metta was obviously doing that out of respect for (Pelicans coach) Alvin (Gentry) and those guys. … He’s a perfect example of what a professional athlete should be.”

Davis missed his second consecutive game with a sore left knee, while Cousins sat out his third straight contest with heel tendinitis.

Los Angeles, meanwhile, missed D’Angelo Russell, who returned home to Louisville. Russell played just hours after his grandmother’s death on Sunday and scored the game-winning 3-pointer at the buzzer. Lakers legend Kareem Abdul-Jabbar, who was sitting among the Staples Center crowd Tuesday, also received a standing ovation ahead of his 70th birthday on Sunday.

Brandon Ingram and Jordan Clarkson added 15 points each for the Lakers, whose longest winning streak in four years has propelled them past Phoenix in the overall NBA standings, though they will finish the season with the league’s third-worst record.

Gentry lamented his team’s loss, which he said was largely due to a major lack of focus.

”We didn’t play hard enough to win the game,” Gentry said. ”Concentration was non-existent. We had no focus. We play an 82-game schedule. Not 80 games. Not 78 games. We weren’t there. We weren’t even close tonight.”

The Pelicans and Lakers, who will miss this year’s playoffs since they are 10th and 14 respectively in the Western Conference, both play their regular-season finale on Wednesday night.

LOS ANGELES, CA – APRIL 06: Metta World Peace #37 of the Los Angeles Lakers points to a teammate during the first half of an NBA game against the Los Angeles Clippers on April 6, 2016 at Staples Center in Los Angeles, California.