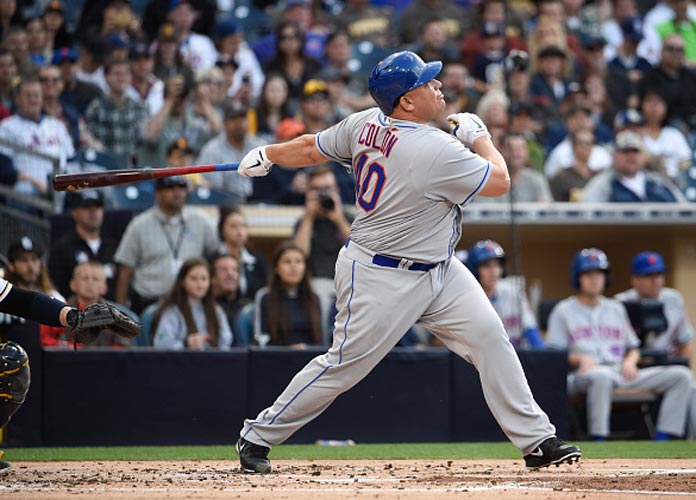 SAN DIEGO, CALIFORNIA - MAY 7: Bartolo Colon #40 of the New York Mets hits a two-home run during the second inning of a baseball game against the San Diego Padres at PETCO Park on May 7, 2016 in San Diego, California. (Photo by Denis Poroy/Getty Images)

Bartolo Colon is a 42-year-old New York Mets pitcher who has long been beloved by his team despite never scored a home run in a game before.

However, he stunned and ultimately delighted fans on Saturday after he hit his first career home run against the San Diego Padres. He knocked the ball toward deep left field and out of San Diego’s Petco Park for a two-run shot to extend the Mets’ lead over the Padres, 4-0 in the top of the second inning. His fellow teammates in the Mets dugout went insane.

Colon labeled the moment the biggest of his career.

“The three years that I’ve been here, I was chasing one. Even back in my Montreal days,” Colon said through an interpreter. “But I wasn’t expecting something like this to happen. … My heart was beating a lot. And today’s a day I’m never going to forget.”

Colon’s historic first home run will now be immortalized not only in the hearts of thousands of fans, but also in the form of a trading card.

Colon, a Dominican right-hander known as “Big Sexy” by his teammates and the media, made his major league debut in 1997 with the Cleveland Indians. His first full season, however, came the following year, when he made his first All-Star game. He won the American League Cy Young Award with the Los Angeles Angels of Anaheim in 2005. After four seasons filled with arm problems and injuries, many fans thought he was done with baseball for good after he missed all of 2010. Instead, he returned and recorded his best season since his Cy Young campaign.

He then had two strong seasons with the Oakland Athletics from 2012-2013, and moved on to the Mets in 2014. Entering the 2016 MLB season, he officially became the oldest active player in the League (following the retirement of Maicer Izturis). He has spent every year of his career in the American League, except for a few months with the Montreal Expos in 2002.

It’s more than just Colon’s home run, however. He also pitched the longest at-bat of record, going 20 deep against Ricky Gutierrez in the eighth inning of a ballgame back in June 1998.

The Mets ended up winning the game 6-3 on Saturday. With this feat, the seasoned Dominican Mets pitcher has certainly earned his way into MLB history as a living legend.

“Bartolo has done it! The impossible has happened!” – @Mets TV broadcaster Gary Cohenhttps://t.co/IMQ1qVDBTs

Statcast had Bartolo Colon’s homer off the bat at a cool 97 mph. It landed 365 feet away. No matter how you slice it, it was perfect. #Mets

PHOTO: SAN DIEGO, CALIFORNIA – MAY 7: Bartolo Colon #40 of the New York Mets hits a two-home run during the second inning of a baseball game against the San Diego Padres at PETCO Park on May 7, 2016 in San Diego, California. (Photo by Denis Poroy/Getty Images)