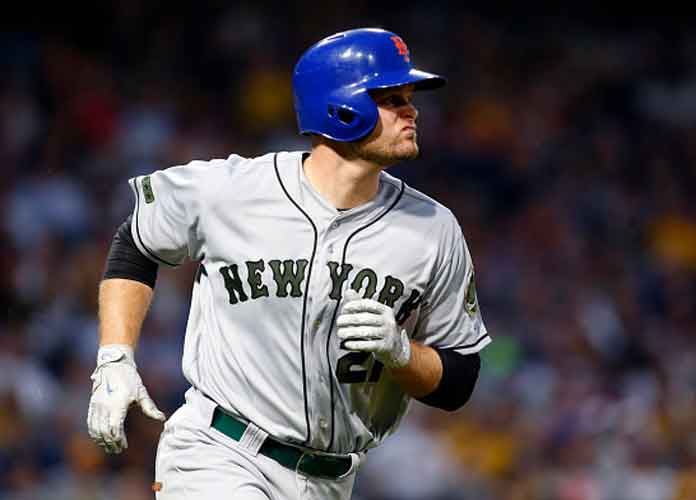 PITTSBURGH, PA - MAY 27: Lucas Duda #21 of the New York Mets reacts after hitting a home run in the fifth inning against the Pittsburgh Pirates at PNC Park on May 27, 2017 in Pittsburgh, Pennsylvania. (Photo by Justin K. Aller/Getty Images)

ESPN’s Buster Olney reported that Tampa Bay will take on the remainder of Duda’s salary, approximately $2.5 million (Duda is set to make $7.25 million in total in 2017). The swap comes just before Monday’s non-waiver trade deadline.

“I’m excited to join the Rays. They’re in the hunt,” said Duda, who is hitting .246 with 17 homers and 37 RBIs. “Kind of mixed emotions. There are guys here I’ve grown pretty close to, and [the Mets] are a first-class organization. I was very proud to be a New York Met, and I’m gonna be very proud to be on the Tampa Bay Rays.”

Rays manager Kevin Cash said Duda, who has also served as an outfielder and designated hitter, is expected to be in the lineup Friday as a DH.

The 31-year-old first baseman — who will become a free agent at the end of the season — has spent his entire career with the Mets, whom he joined in 2010 after being drafted in 2007. He finished seventh in franchise history in scoring with 125 home runs.

Duda’s throwing error in Game 5 of the 2015 World Series led to the Kansas City Royals’ championship, although that was one of the few major mistakes of his career.

Among the other Mets who are eligible for free agency after the World Series outfielders Curtis Granderson and Jay Bruce, second baseman Neil Walker, shortstop Asdrubal Cabrera and relievers Addison Reed and Jerry Blevins.

Granderson posted the following video on Instagram on Thursday night. The clip shows the outfielder desperately hanging onto Duda’s leg and begging the first baseman not to leave the Mets.

“I’m sad to see him go but excited for the opportunity for him,” said Granderson of Duda.

Smith, a 23-year-old right-handed reliever, was a third-round draft pick by Detroit in 2015 and was sent to Tampa Bay in April. He is 1-2 with a 1.60 ERA with seven saves in 31 games this season for four minor league teams, three of which are Rays affiliates. Smith most recently played with Class AA Montgomery, can toss a fastball in the mid to high 90s and was rated No. 3 among Tampa Bay’s prospects by MLB.com.

Collins said he expects Walker — who has been out since June 15 with a hamstring strain — to return to the Mets’ lineup for the team’s three-game road series against the Seattle Mariners this weekend. Friday’s opener will begin at 10:10 pm EST.

The Mets (47-53) fell to the San Diego Padres 7-5 at Petco Park on Thursday, their third loss in eight games. Collins’ team sits 14 games behind Washington (61-39)  for the lead in the National League East. The Mets are also 9 1/2 games out of a wild-card berth.

Dominican right-hander Rafael Montero will start for the Mets in Friday’s game in Seattle.