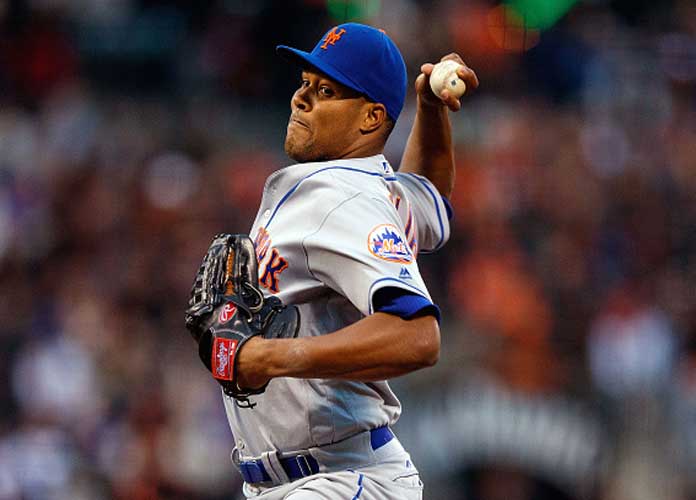 Jeurys Familia will have to appear in court next week.

The New York Mets closing pitcher was arrested at his New Jersey home on Monday following an alleged domestic violence incident, and now has a 10 a.m. court proceeding scheduled for Nov. 10 in Fort Lee Municipal Court.

Familia, 27– who is identified in the complaint as Jeurys F. Mojica– was charged with simple assault.

In a supremely ironic case, the charge comes just weeks after the All-Star Dominican pitcher appeared in an ad where he stated in Spanish, “I am a fan of baseball. I am a fan of the Mets. I am not a fan of domestic violence.”

Familia, who was been with the Mets for five seasons, shares his Fort Lee apartment with his wife, Bianca Rivas, and their 1-year-old son, Jeurys Jr.

Fort Lee police chief Keith Bendul told the Record of North Jersey that police responded to a call regarding “a dispute” at an apartment on Park Avenue at 2:22 a.m. Monday. The battered victim suffered a bruised cheek and a scratched face, according to police, who said the victim’s injuries were visible to the naked eye.

The Mets star was released on $1,500 bail and is barred from phone, mail or personal contact with the victim– whose identity was withheld, the complaint stated.

Familia’s attorney, Paul Brickfield, has not yet made an official statement.

New York City Council Speaker Melissa Mark-Viverito, who announced the campaign on Oct. 5, said in a statement she was “deeply disturbed” by the allegations against Familia and called on the MLB to launch an investigation.

Familia is the second athlete from a New York-based major league sports team to be investigated for domestic abuse in the last month. Former Giants kicker Josh Brown also confessed in a diary to abusing his wife, and was released from the team after initially being placed on the NFL commissioner’s exempt list.

“I will be reaching out to the Mets and the Familia ads will be removed from the campaign,” Mark-Viverito said. “Last week it was Josh Brown this week it’s Familia. The problem is rampant. The solution is to confront it.”

Familia’s arrest also will provide another test for Major League Baseball’s domestic violence policy, unveiled in August 2015 after negotiations with its Players Association.

Among the players who have been suspended under the policy is Familia’s teammate, Jose Reyes. Then a member of the Colorado Rockies, Reyes was suspended without pay for the first 51 games of the 2016 season in the wake of his arrest on a domestic violence charge last offseason.

Police at the time said Reyes shoved his wife into a door in a Hawaii hotel. Reyes pleaded not guilty and the charges were dropped because prosecutors said Reyes’ wife declined to cooperate. Reyes was released by the Rockies after his suspension ended and signed with the Mets on June 25.