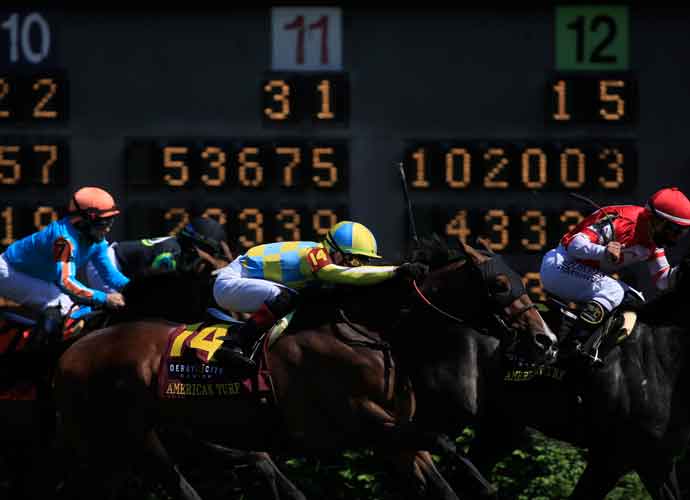 Thoroughbred horses compete during a turf race at Churchill Downs ahead of the 147th Running of the Kentucky Derby in Louisville, Kentucky, U.S., on Saturday, May 1, 2021. Medina Spirit won the 147th Kentucky Derby on Saturday evening, awarding a seventh Kentucky Derby win to trainer Bob Baffert and a fourth to jockey John Velazquez. Photographer: Luke Sharrett/Bloomberg via Getty Images

The nearly year-long drama concludes after a recent hearing before a three-member panel of KHRC stewards, which ended with the ruling that Medina Spirit—who died in December at Santa Anita Park (Calif.)—is DQ’d after a positive test for a banned corticosteroid (betamethasone) after last year’s Derby.

Betamethasone is commonly used to reduce swelling and pain.

“Medina Spirit is disqualified and all purse money forfeited,” the ruling says. “During his suspension, Mr. Baffert is denied the privileges of all facilities under the jurisdiction of the Kentucky Horse Racing Commission. Entry of all horses owned or trained by Mr. Baffert is denied pending transfer to persons acceptable to the stewards.”

Baffert’s suspension begins March 8 and runs through June 5, the ruling states. This year’s Kentucky Derby is set for May 7.

Clark Brewster, Baffert’s attorney, said Monday that he and his client immediately appealed the ruling, and, if it comes down to it, they’d take matters directly to the Kentucky state court system.

“There’s no question the substance in (Medina Spirit) came from a salve,” Brewster said. “That was proven, not only scientifically, but from record keeping. The rule dealing with the use of betamethasone only as an intra-articular injectable was never violated.”

Brewster also called shenanigans on the panel, as one member, Tyler B. Picklesimer, is the current director of racing at Turfway Park, which is owned by Churchill Downs.

“There’s no way there wasn’t bias,” he said. “I just don’t think it has any ring of fairness. I’m very confident that when we get the opportunity to be before neutral decision makers who are generally interested in applying the rules to the facts, we win.”

The official 2021 Kentucky Derby winner is now Mandaloun, and the $1.8 million purse money goes to Mandaloun’s connections—including owner Juddmonte. It’s the third time in the 147-year history of the race that a first-place finisher has been DQ’d.

“We were always hopeful that when people saw the facts and rules, that this matter was over,” said Brewster. “That’s not the case, so we’ll weigh our options as to whether to commence action against Churchill at the same time, or proceed with an appeal and file suit at a later time.”

The 69-year-old Baffert still awaits a ruling from the New York Racing Association that, last May 17, issued a temporary suspension of Baffert which includes Baffert being barred from entering any of his horses in races at Belmont Park, Saratoga Race Course, and Aqueduct Racetrack.

Read more about:
Kentucky Derby Mandaloun Medina Spirit
Listen to the uInterview Podcast!
Get the most-revealing celebrity conversations with the uInterview podcast!