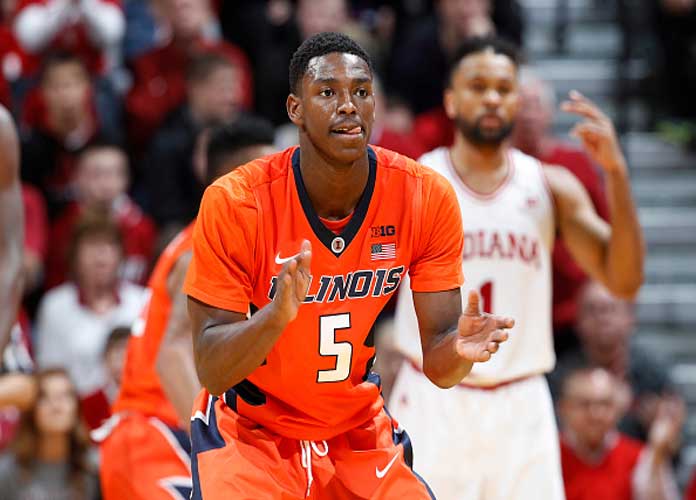 BLOOMINGTON, IN - JANUARY 07: Jalen Coleman-Lands #5 of the Illinois Fighting Illini reacts in the second half of the game against the Indiana Hoosiers at Assembly Hall on January 7, 2017 in Bloomington, Indiana. Indiana defeated Illinois 96-80. (Photo by Joe Robbins/Getty Images)

Maverick Morgan scored 16 points to lead Illinois to a strong, 85-69 home victory over the Michigan Wolverines on Thursday night.

Malcolm Hill added 15, Kipper Nichols 13, Jalen Coleman-Lands 12 and Leron Black 10 for the Illini. The Wolverines’ defense fell apart late in the first half. Nichols had his best performance of the season.

Illinois (12-5, 2-2 Big Ten) changed up its lineup following its 96-80 loss to Indiana on Saturday, and the improvements showed, as six players finished in double digits.

The Fighting Illini went on a 17-2 run to close out the first half for a 49-36 lead before the break.

After the teams traded baskets in the first half, Derrick Walton Jr. hit a 3-pointer to give the Wolverines a 34-32 lead at the 4:30 mark. Everything went downhill from there, however.

On the subsequent possession, Walton was called for an offensive push-off and drew a technical foul for slamming the ball down on the floor with 3:18 remaining in the half.

“First and foremost, I apologized to the ref because honestly I wasn’t even mad about the call,” Walton said. “I thought it was a good call. I actually tried to make the shot but it was just bad timing, and me and the ref talked about it. I apologized to my guys and that’s kind of what kick-started the run that took them into the half.”

Hill sank the two technical free throws to spark a string of 12 consecutive points for the Illini. Nichols followed with an offensive put-back, Hill hit a mid-range jumper and Coleman-Lands ended it with back-to-back 3-pointers.

Illinoi’s Michael Finke hit one last 2-pointer before halftime to give his team the more-than-comfortable 13-point lead at that point.

“Really tough game for even this coach to understand,” Michigan coach John Beilein said. “They shot the ball well. We didn’t guard the ball very well again and that’s the story of the game.”

Michigan next host Nebraska on Saturday, while Illinois will attempt to avenge an earlier defeat by hosting Maryland on Saturday.

BLOOMINGTON, IN – JANUARY 07: Jalen Coleman-Lands #5 of the Illinois Fighting Illini reacts in the second half of the game against the Indiana Hoosiers at Assembly Hall on January 7, 2017 in Bloomington, Indiana. Indiana defeated Illinois 96-80. (Photo by Joe Robbins/Getty Images)