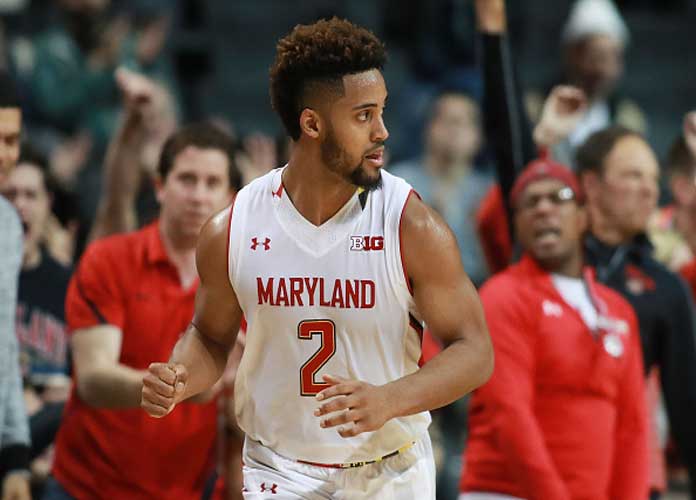 NEW YORK, NY - NOVEMBER 25: Melo Trimble #2 of the Maryland Terrapins reacts after hitting a three pointer against the Richmond Spiders in the second half during the Barclays Center Classic at Barclays Center on November 25, 2016 in the Brooklyn borough of New York City.

Freshman Kevin Huerter sank a critical three-pointer with 1:48 remaining, then grabbed a defensive rebound and found fellow first-year Anthony Cowan for a layup with 1:13 left to lead the Maryland Terrapins to a 75-72 home victory over the Indiana Hoosiers on Tuesday night.

“I always tell Anthony in practice just take off when I get a rebound, and I’ll find you,” said Huerter, who finished with 11 points and seven rebounds, and made several key defensive plays down the stretch.

Cowan’s layup, which made it 73-70, didn’t seal the victory. That only occurred after Indiana guard Robert Johnson Jr. missed a potential game-tying 3-pointer at the buzzer. The Terps picked up their second crucial Big Ten win in four days, thanks to 18 points from junior Melo Trimble and six blocks from senior Damonte Dodd. However, the three freshman starters also stepped up, as Huerter, Cowan and Justin Jackson combined for 37 points and 16 rebounds to help launch Maryland (15-2, 3-1 Big Ten) into a five-way tie for first place in the Big Ten.

Maryland coach Kevin Turgeon praised his players for their performance.

“Kevin’s got point guard skills,” Turgeon said. “He doesn’t handle as much for us because of the other two point guards [Trimble and Cowan]. What a pass that was. I was just hoping Anthony could get to the rim as fast as he could.”

“An extremely hard-fought game, no question about that. It came down to one or two more plays by them,” Indiana Coach Tom Crean said.

The Hoosiers fouled Trimble with 8.2 seconds to go and the Maryland star made two free throws, giving him 1,400 points for his career and helping him pass Gene Shue and former teammate Dez Wells for 20th on the school’s scoring list.

The game was played before a crowd of 17,213 that included Hall of Fame coach Gary Williams as well as Baltimore Ravens owner Steve Bisciotti and Ravens coach John Harbaugh– who sat behind the Indiana bench and Crean, his brother-in-law.

Sophomore guard James Blackmon Jr. led the Hoosiers with 22 points. Blackmon hit nine of 15 shots overall, including four of eight 3-point attempts. Maryland did well defensively despite this, however.

NEW YORK, NY – NOVEMBER 25: Melo Trimble #2 of the Maryland Terrapins reacts after hitting a three pointer against the Richmond Spiders in the second half during the Barclays Center Classic at Barclays Center on November 25, 2016 in the Brooklyn borough of New York City. (Photo by Michael Reaves/Getty Images)