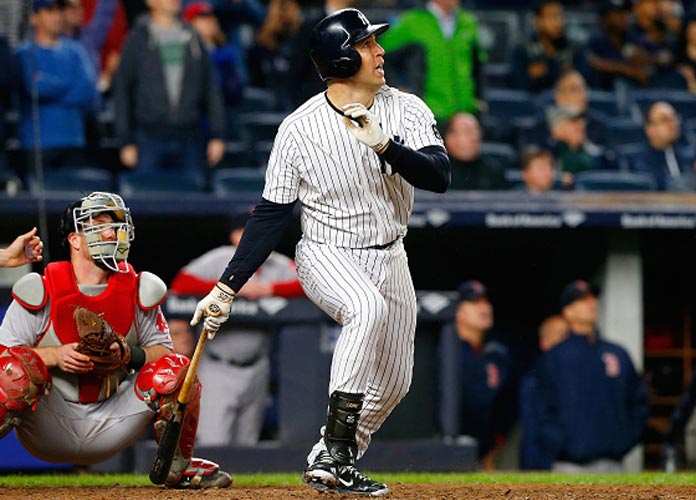 The New York Yankees seemed to be dangling off the edge of a cliff entering Wednesday — the cliff of elimination, that would deny them a chance to make this year’s playoffs.

Nevertheless, Mark Teixeira proved to be their saving grace. The first baseman smacked a walk-off grand slam off Joe Kelly in the ninth inning to power the Yankees to a 5-3 home victory over the Boston Red Sox on Wednesday night.

The Red Sox, however, still celebrated their clinching of the American League East division on Wednesday at Yankee Stadium.

New York, trailing by three runs with one out remaining, knew a loss would eliminate them after the Baltimore Orioles celebrated a come-from-behind, 3-2 road victory over the Toronto Blue Jays earlier that same night.

Teixeira cleared the bases with a drive into the right-field bullpen after an ineffective relief outing by Craig Kimbrel, thus keeping Boston from starting an on-field celebration of their first division championship since 2013.

“That was fun. That’s as good as it gets right there,” Teixeira said. “I guess if you hit one to win the World Series, it might be just as much fun, but for the kind of season we’ve had — we’ve been fighting all year. To come back from three runs down against one of the best closers in baseball, it shows a lot about our team.”

It marked the first time a team has won the division on the same day as a walk-off defeat since the 2000 White Sox on Sept. 24, 2000 against the Twins.

The Yankees themselves seemed shocked by the outcome.

“It’s an unbelievable moment,” Manager Joe Girardi said. “Baltimore won tonight, and you have to win or you’re eliminated, and to be able to come up with five runs in the ninth inning ….”

The bombers entered the ninth inning having recorded only one hit against Clay Buchholz, the Red Sox’ starter, and two relievers.

Brett Gardner led off the ninth with a single, and Kimbrel then walked Jacoby Ellsbury and Gary Sanchez. Brian McCann fought off four two-strike pitches to work a 10-pitch walk that forced in a run and ended Kimbrel’s night.

Kelly entered the game and struck out Starlin Castro, and then retired Didi Gregorius on a shallow fly ball in foul territory, thus setting up Texeira’s grand slam, the 409th home run of his career.

Teixeira also hit a game-tying homer in the ninth inning of Monday’s comeback victory at Toronto. The 36-year-old first baseman, whose production and playing time have decreased following a string of knee and neck injuries, announced in early August that he would retire at the end of the season.

“That’s as good as it gets right there,” Teixeira said. “I guess if you hit one to win the World Series, it might be this much fun.”

Kimbrel, meanwhile, shook off his mistakes and the loss given the Red Sox’ big division clinch.

“It’s pretty easy to put that one behind me after this,” said Kimbrel in a champagne-soaked clubhouse. “Like John Farrell said, ‘Don’t get one game get in the way of the pleasure of what we did this year.’ Personally, it was frustrating, but it will be easy to put it behind me.”

The Yankees secured their 24th straight winning season, and were fortunately spared of having to see the Red Sox celebrate on their home turf on Wednesday. New York is four games back of the second AL Wild Card spot.

Mookie Betts had a two-run, eighth-inning double off Adam Warren, a hit that came after a Castro throwing error, Dustin Pedroia’s ground-rule double and an intentional walk to David Ortiz.

One frame later, Ortiz, aka ‘Big Papi,’ raced home with Boston’s third run as a passed ball squirted by Sanchez.

The team with the best record will play the winner of the AL Wild Card Game, and the No. 2 and No. 3 seeds will face each other.

The two teams will face off for the finale of their three-game series at Yankee Stadium on Thursday night. Left-hander Henry Owens will start for the Red Sox in place of Drew Pomeranz, who was scratched due to soreness in his left forearm.