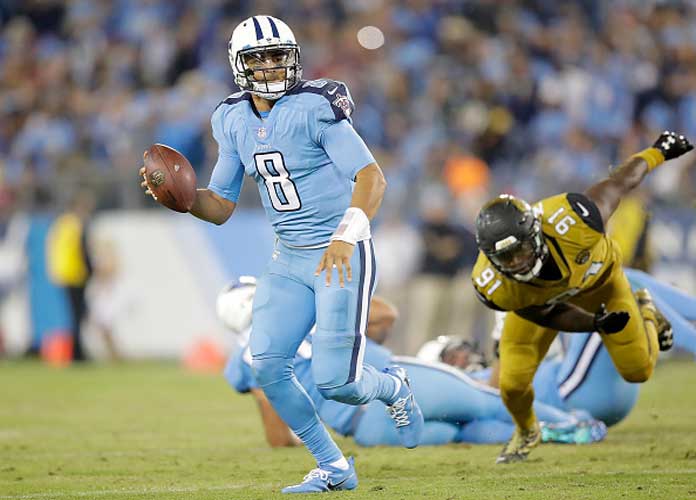 The Las Vegas Raiders have agreed to a deal with former Tennessee Titans quarterback Marcus Mariota.

The @Raiders have come to terms with Marcus Mariota

The 26-year-old quarterback signed with the Raiders on Monday. The financial terms and length of Mariota’s contract were not disclosed. Mariota leaves the Titans after losing his job to Ryan Tannehill in 2019. Mariota will likely enter the 2020 season as the Raiders’ No. 2 quarterback but he could push incumbent starter and three-time Pro Bowler Derek Carr for more playing time.

The Titans tried to make it work with Mariota, but their time with the QB produced only one playoff appearance in 2017 with him as the starting quarterback. He struggled last season with a 2-4 record before giving up his starting spot. A variety of factors kept Mariota from developing as a quarterback. There was constant turnover at offensive coordinator, and he dealt with a series of injuries during his time in Tennessee. Despite his quiet demeanor, Mariota had a strong presence as a leader in the Titans’ locker room.

Mariota entered the league as the No. 2 overall pick in the 2015 NFL Draft and completed 59.4 percent of his passes for 1,203 yards, seven touchdowns, and two interceptions in seven games last season before being benched. He completed 62.9 percent of his throws for 13,207 yards, 76 touchdowns and 44 interceptions in his five seasons with the Titans.

When he was with NFL Network as a draft analyst, Raiders general manager Mike Mayock had Mariota as his top quarterback prospect coming out of Oregon in 2015, ahead of eventual No. 1 overall pick Jameis Winston.

“The biggest thing that jumps out with Marcus Mariota is his athleticism,” Mayock said after the Titans drafted him second overall. “Think Colin Kaepernick. … Now, every once in a while, he misses a wide-open throw. Once or twice a game that happens. This is what he’s going to have to learn.”

@Raiders extremely happy to see Marcus Marriota sign! I’ve been saying since he was benched, Marcus and Jon belong together! If Derek does what I think he will do, Marcus may never play for us, but he will be a more confident QB the next time he does play!!