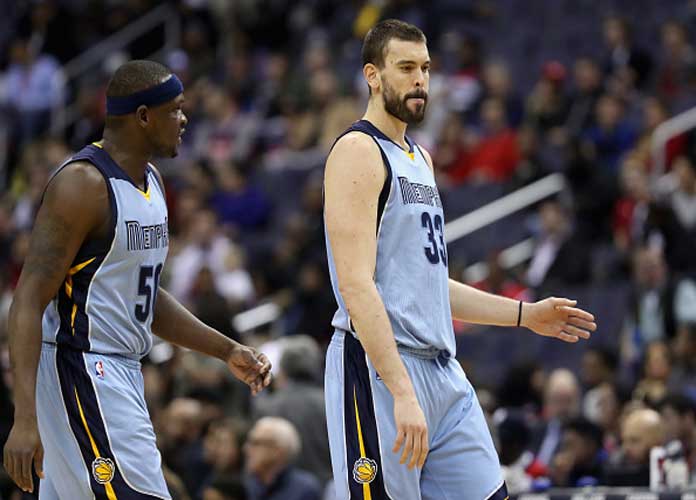 WASHINGTON, DC - JANUARY 18: Zach Randolph #50 and Marc Gasol #33 of the Memphis Grizzlies walk off the floor against the Washington Wizards at Verizon Center on January 18, 2017 in Washington, DC.

The Memphis Grizzlies capitalized on Kawhi Leonard’s absence to cruise to an 89-74 home victory on Monday night, keeping the San Antonio Spurs to their lowest point total since 2011.

Marc Gasol and Zach Randolph scored 15 points each for the Grizzlies (32-22), while the Spurs were held to 37 percent shooting overall and 21 percent from outside the arc — both season-lows for the team.

”When everybody is connected defensively … communicating, being consistent and solid and being unselfish defensively, that puts us at a different level,” Gasol said.

San Antonio’s nine fourth-quarter points matched the lowest for the Spurs (39-12)– who had won three straight– in any period this season. The team had reached 100 points in 27 consecutive games.

”Just too many defensive errors,” San Antonio coach Gregg Popovich said. ”Obviously, if you make a shot in the fourth quarter, it would have helped, but the shooting was horrendous.”

Mike Conley finished with 12 points and nine assists for Memphis, which won its second straight and fifth in its last six.

The game was close until the Grizzlies pushed their lead to double digits just after the midway point of the fourth quarter and maintained their advantage the rest of the way.

Leonard sat out for the Spurs with a quad contusion. The small forward averages 25.3 points per game, 11th best in the NBA.

”Obviously, it’s nice to catch the Spurs without Kawhi and Pau Gasol (out with a broken finger on his left hand),” Memphis coach David Fizdale said, ”so I don’t want to get too far ahead of ourselves.”

David Lee led San Antonio with 14 points, converting all six of his shots. LaMarcus Aldridge added 13 points, connecting on only 4 of 19 attempts.

Memphis’ win marked their first over the Spurs since a 95-87 victory on Dec. 30, 2014. San Antonio had won nine straight over the Grizzlies.

The matchup also featured the two oldest players in the NBA: Memphis’ Vince Carter, who recently turned 40, and San Antonio’s Manu Ginobili, who turns 40 in July. Carter had four blocks in the game.

The Spurs next visit Philadelphia on Wednesday night, when the Grizzlies host Phoenix, the middle game of a three-game home-stand.

WASHINGTON, DC – JANUARY 18: Zach Randolph #50 and Marc Gasol #33 of the Memphis Grizzlies walk off the floor against the Washington Wizards at Verizon Center on January 18, 2017 in Washington,  DC.