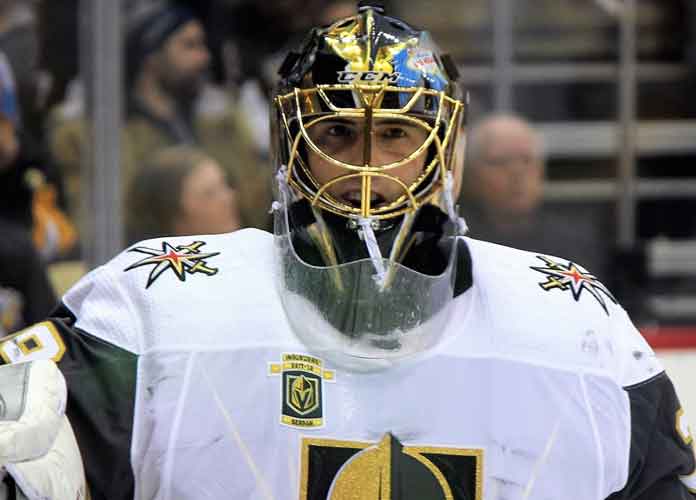 Marc-Andre Fleury has made some impressive saves in his career, but one stop in particular stood out on Monday night.

The Vegas Golden Knights goaltender had a huge save in overtime of the team’s 4-3 victory over the San Jose Sharks in Game 3 of the Western Conference Semifinals at SAP Center.

San Jose’s Joe Pavelski faked a wraparound behind Fleury’s net and passed to Logan Couture, who fired a quick, strong shot from close range 3:10 into overtime. Fleury, a Canadian former Pittsburgh Penguins goalie, denied Couture by spreading his legs out and doing a full split onto the ice while also shooting his left hand into the air to snag the puck.

“I was looking at the guy with the puck,” Fleury said, per NHL.com. “I just tried to follow the pass and get out there a bit and I had a little time to react on it. It was a good feeling.”

Fleury, 33, finished with 39 saves on Monday. He now has six wins in the playoffs.

The Golden Knights — who now lead the second-round playoff series 2-1 — were left in awe by their goalie’s amazing skill.

William Karklsson scored the game-winning goal for Vegas at 8:17 of overtime.

After crushing the Sharks 7-0 in Game 1 of Round 2 on Thursday, the Golden Knights lost 4-3 to San Jose in double overtime in Game 2 on Saturday.

Game 4 is set for Wednesday at 10pm EST in San Jose. The game will air on NBC Sports Network.