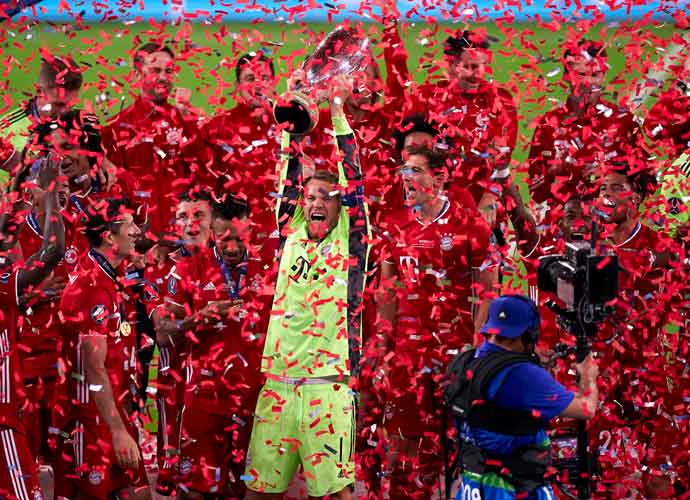 BUDAPEST, HUNGARY - SEPTEMBER 24: Manuel Neuer of Bayern Munich lifts the UEFA Super Cup trophy as he and team mates celebrate victory after the UEFA Super Cup match between FC Bayern Munich and FC Sevilla at Puskas Arena on September 24, 2020 in Budapest, Hungary. Football Stadiums around Europe remain empty due to the Coronavirus Pandemic as Government social distancing laws prohibit fans inside venues resulting in fixtures being played behind closed doors.

During the past few years, Manuel Neuer, Germany international and Bayern Munich goalkeeper, has proven to be among the greatest football players of his generation.

Neuer has been a vital player for both his club and country. He won trophies both collectively and individually. With Germany, he won the UEFA under 21 European Championship in 2009 and the FIFA World Cup in 2014. With Bayern Munich, he won eight Bundesligas, six German Cups, four German Super Cups, two UEFA Champions Leagues, two UEFA Super Cups and one FIFA Club World Cup.

Individually, he won the German Footballer of the Year twice, the FIFA World Cup Golden Glove in 2014, the UEFA Goalkeeper of the Year and the IFFHS World’s Best Goalkeeper four times each.

Neuer’s individual nominations do not stop there. The goalkeeper is nominated for the 2019/2020 UEFA Men’s Player of Year Award after a wonderful season at a club level.

Many critics claimed that his form was dipping down because of his age. However, the goalkeeper reminded everyone that his class is ageless.

His world class heroics in the UEFA Champions league last season wowed everyone. One of his incredible highlights last season was during the Champions League final when he denied Paris Saint Germain’s forward Kylian Mbappe a one on one chance and then an instant rebound. Bayern Munich went on to win the game 1-0 and Neuer managed to keep a clean sheet against a very challenging PSG.

Neuer is definitely up there with goalkeeping greats like Gianluigi Buffon, Oliver Kahn, Peter Schmeichel and Lev Yashin.