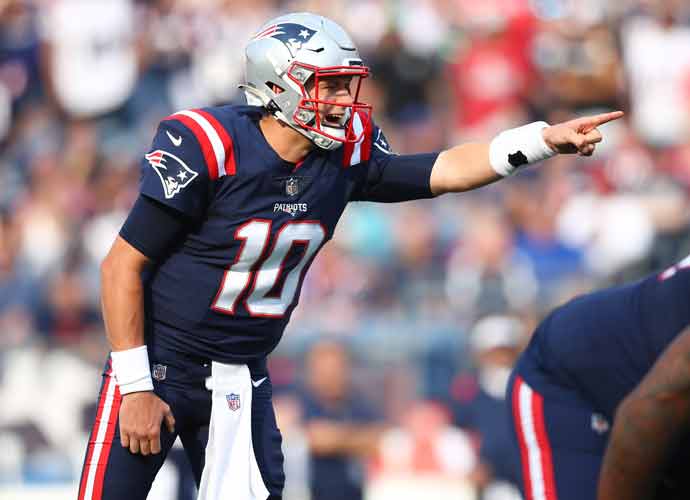 The New England Patriots offense has been underwhelming this year and Mac Jones was visibly frustrated about it on the sidelines.

The former Alabama Crimson Tide quarterback threw for just 195 yards (5.4 yards per attempt) and a touchdown in Thursday’s loss against the Buffalo Bills.

During the game, a video on the sideline showed Jones yelling, “Throw the f—ing ball. The f—ing quick game sucks.

And he ended it with more outburst: “F—!”

It’s unclear if the words were uttered at offensive coordinator Matt Patricia‘s direction – but he was clearly frustrated with some of the play calls.

While Jones addressed it in his post-game press conference and admitted he let his emotions get to him, he also said, “I felt like we needed chunk plays.”

“I shouted that out to get everyone going and that’s emotional, that’s football. I’m passionate about this game.”

And he added, “It wasn’t directed at anybody.”

Here is Mac Jones’ full explanation of the viral video where he cussed out the Patriot sideline, per team-provided video. pic.twitter.com/CnY4PsxEBB

But clearly, Jones wants more creatively to design plays that have a chance for more yards.

Averaging just over five yards per attempt won’t cut it.

And clearly, both Jones and Patricia will have to get on the same page and change something about the offense.

In two of the last three games (against the New York Jets and Bills), the Patriots have only managed to score one offensive touchdown.

On the season, the Patriots are among the bottom eight in the league in total offense.

Jones in his sophomore year in the NFL has thrown for nearly 2,000 yards along with seven interceptions and seven touchdowns.

But most importantly, the Patriots are now 6-6 on the season and almost certainly blew any chance at winning the AFC East.

And the schedule doesn’t get much easier going forward – making the playoffs a difficult task for the team.

The Patriots need to play the Bills once more, the Miami Dolphins along with the Cincinnati Bengals.

But clearly, the Patriots will need to adapt on offense.

Read more about:
Buffalo Bills Mac Jones Matt Patricia
Listen to the uInterview Podcast!
Get the most-revealing celebrity conversations with the uInterview podcast!

Tua Tagovailoa Out With Concussion, Skylar Thompson To Start Against Bills

Damar Hamlin Can Now Breath On His Own & Face-Timed Team