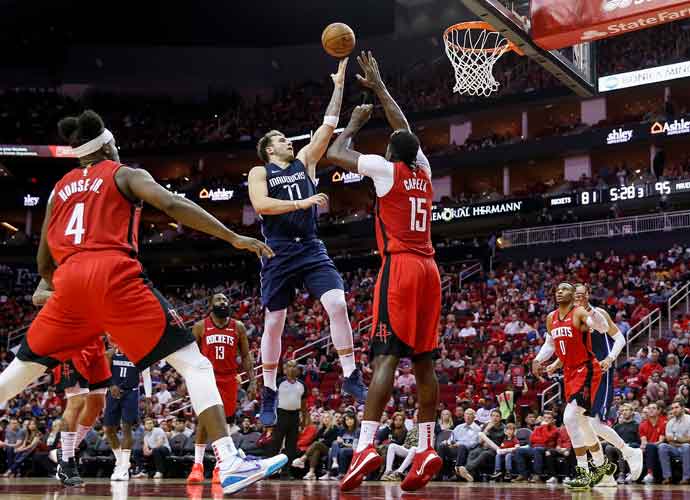 HOUSTON, TX - NOVEMBER 24: Luka Doncic #77 of the Dallas Mavericks shoots the ball over Clint Capela #15 of the Houston Rockets in the second half at Toyota Center on November 24, 2019 in Houston, Texas.

Last night, the Houston Rockets fell to the Dallas Mavericks as Luka Doncic, the Mavs’ 20-year-old Slovenian standout put on an absolute offensive showcase. The Mavericks went on to beat the Rockets 137-123.

Doncic – a former third overall pick in the 2018 draft – posted 41 points and 10 assists against a perennial playoff contender. This is just the fourth game in a row that he has posted 30+ points and 10+ assists. Doncic is also the second-youngest player to ever post a 40-point triple-double, after LeBron James.

When asked about the win over the Rockets, Doncic responded, “Those matchups, they’re big. Harden is a top-three player in the league, and this was a big win for us.”

Doncic has certainly impressed many this season, skyrocketing him to the top of MVP voting thus far in the season. Previously, NBA stars such as Dirk Nowitski had discussed what they believe makes him such a special player:

“He plays with a savviness that I never had — I might still not have it. Honestly, the way he carries himself in scrimmages… the way he reads the situations in pick-and-rolls, passes, he’s fantastic. His court vision is something that I haven’t seen in a young player like that in probably forever.”

Thanks to not only Doncic but also the stellar play of the entire Mavericks team, Dallas currently sits at 11-5, good for third place in the Western Conference. On Wednesday, the Mavs will host Kawhi Leonard and the Los Angeles Clippers.

The Rockets currently sit at 11-6 and are in sixth place in the Western Conference. Houston will host the 11-4 Miami Heat and Jimmy Butler on Thursday.

With a lot of season left to play for both of these teams, this matchup is certainly one that we could see again come playoff time. All eyes will be on respective stars Doncic and James Harden, as both teams look to ascend to the top of the conference in the coming months.