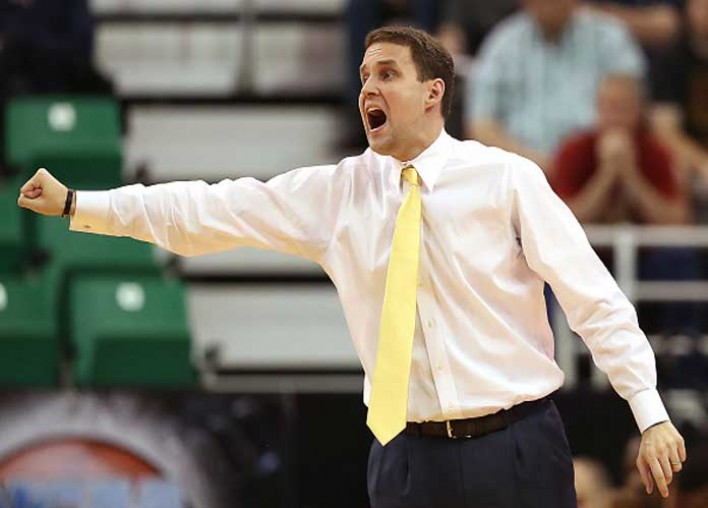 SALT LAKE CITY, UT - MARCH 16: Head coach Will Wade of the Virginia Commonwealth Rams instructs his team against the St. Mary's Gaels during the first round of the 2017 NCAA Men's Basketball Tournament at Vivint Smart Home Arena on March 16, 2017 in Salt Lake City, Utah. (Photo by Christian Petersen/Getty Images)

Will Wade is parting ways with Virginia Commonwealth to take charge of the LSU Tigers men’s basketball team, after guiding the Rams to the NCAA Tournament in both his seasons as coach.

According to ESPN’s Jeff Goodman, Wade signed a six-year deal with LSU.

The 34-year-old took over as coach for VCU after Shaka Smart left for Texas in 2015.

The Rams are 51-20 under Wade, with back-to-back NCAA tournament appearances. However, VCU (26-9) lost to St. Mary’s 85-77 in the first round of this year’s tournament on Thursday.

Wade was also the head coach at Chattanooga for two years, going 40-25 overall and 27-7 in the Southern Conference.

Wade, one of the youngest coaches in college basketball, started his coaching career at Clemson as a graduate assistant and director of basketball operations from 2005 to 2007 before moving on to become an assistant coach at Harvard and VCU.

He received an eight-year contract extension from VCU following his first season that would have paid him $1.4 million this season, plus incentives, and $1.5 million in each of the remaining seasons. LSU will have to pay the Rams $1 million as compensation for hiring Wade and agree to a home-and-home series with VCU within three years. Wade will inherit a struggling Tigers team that went 10-21 this season and finished 13th in the Southeastern Conference.

“I always meet with coaches after the season to determine the best ways to build their programs and put our student-athletes in the best position to reach their potential,” VCU athletics director Ed McLaughlin said in a statement released Tuesday. “Will and I agreed on the necessary next steps, and we met all of Will’s requests. He ultimately decided he would rather coach elsewhere.”

The Rams have reached the NCAA Tournament for seven consecutive seasons. VCU and Kansas are the only teams that have won at least 24 games in each of the last 11 seasons. However, the Rams have also lost four coaches to major college jobs since 2006.

VCU is also in a tricky position because it is losing five graduating seniors from this year’s team, including leading scorer JeQuan Lewis, and are set to have only two seniors on next year’s squad.

Nevertheless, McLaughlin remains confident VCU will remain an attractive destination for both new coaches and players, and said the search for Wade’s successor will begin immediately.

“We have a world-class practice facility, a sold-out arena every night and one of the greatest fan bases in all of college basketball,” said McLaughlin. “VCU basketball is bigger than one person. We remain committed to ensuring that VCU basketball remains a top-25 program nationally. We have a tradition of remarkable success that is focused ultimately on providing our student-athletes with a positive experience, focusing on our core values: student-athlete focus, drive to excel and integrity.”

SALT LAKE CITY, UT – MARCH 16: Head coach Will Wade of the Virginia Commonwealth Rams instructs his team against the St. Mary’s Gaels during the first round of the 2017 NCAA Men’s Basketball Tournament at Vivint Smart Home Arena on March 16, 2017 in Salt Lake City, Utah. (Photo by Christian Petersen/Getty Images)