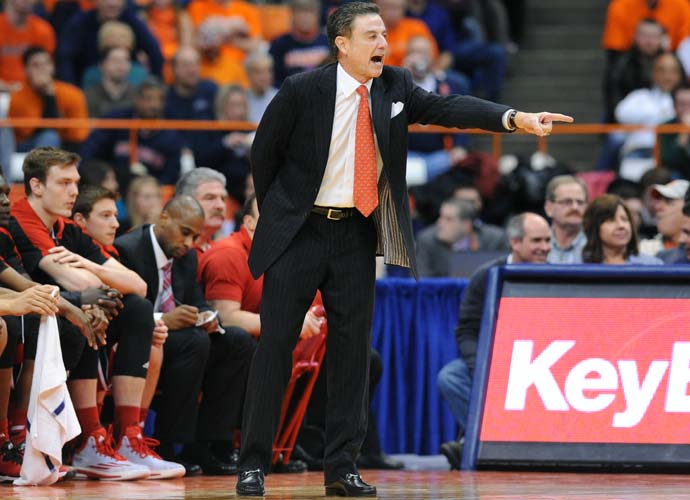 SYRACUSE, NY - FEBRUARY 18: Head coach Rick Pitino of the Louisville Cardinals calls a play for his team against the Syracuse Orange during the second half at the Carrier Dome on February 18, 2015 in Syracuse, New York. Syracuse defeated Louisville 69-59.

The University of Louisville’s Men’s Basketball program is once again under investigation by the NCAA, as they were hit with a Notice of Allegations by the league Monday afternoon.

The allegations against Louisville include a Level I allegation involving improper recruiting practices for former recruit Brian Bowen II and the coach of a different prospect, as well as three Level II allegations against former head coach Rick Pitino. The program is also accused of failing to properly monitor the recruitment of an incoming high-profile athlete.

Toward the end of Pitino’s tenure with the Cardinals, the NCAA placed Louisville on probation in 2017 following an investigation into allegations against a former Louisville staff member who arranged striptease dances and sex acts for recruits during parties from 2011-2015. The NCAA forced Louisville to vacate their 2013 national championship and banned the team from the postseason during the 2015-2016 season.

Current Louisville head coach, Chris Mack in a statement said that the University will recover. “While I understand the allegations brought today, I am confident that the University will do what is right, which includes fighting back on those charges that we simply do not agree with, and for which the facts do not substantiate,” Mack said. “The future is bright for Cardinal Basketball. Our focus will continue to be on our tremendous student-athletes.”

Read more about:
Louisville Men's Basketball NCAA Rick Pitino
Listen to the uInterview Podcast!
Get the most-revealing celebrity conversations with the uInterview podcast!